I’ve always viewed the Assassin’s Creed games like the Lego games. They’re all very similar and my interest is only piqued by a particular setting. Just as I only tend to play Lego games if they have Batman in them, I only played this game because it had pirates in it. I had also heard this was one of the best Assassin’s Creed games, which all things considered, isn’t very encouraging. 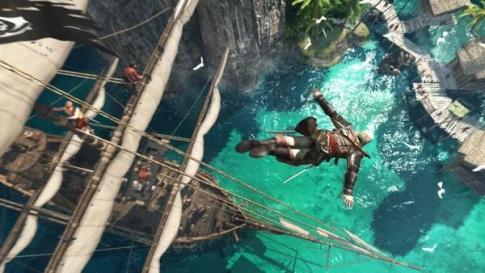 As this is a beloved game I am about to shit on, let’s start with the good stuff. I want to butter you up so you can at least open your minds to my lukewarm reception of Black Flag. 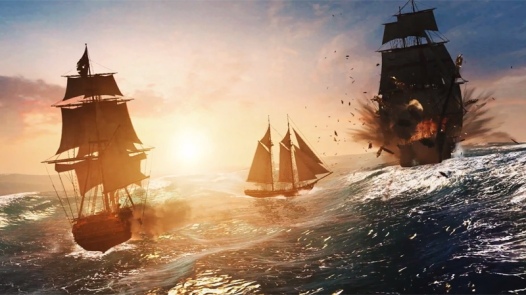 Edward Kenway is a fun character. He grows from an immoral rogue (murderer!) into a respectable anti-hero (nice pirate!). He’s amusing and I like that he’s Welsh. Black Flag is an essentially solid execution of a great idea: an open-world piracy game where you’re also a ninja. You can explore and rob ships and ports. You can find hidden treasure. You can take on the navies of various states. There’s cutlass and pistol fighting. I liked customising my ship and my Edward. Taking on sea forts was also always a fun affair. I actually loved micromanaging my pirate fleet. There are even a few ancient tombs to discover, albeit ones related to Assassin’s Creed lore.

In fact, if there is a macro problem with this game it is that it is an Assassin’s Creed game. It’s dragged down by being beholden to the Assassins versus Templars plot, as well as a total bore whenever a ‘modern day’ sequence begins. This is in addition to Ubisoft’s love of copy-and-paste side missions and over loading of collectibles.

Now, often when video game critics themselves make that criticism they do so poorly. They actually copy-and-paste their criticism without a sense of irony. Most video gaming people are exactly that: people. They have jobs that take up time and financial responsibilities that take up money. So a game loaded with tonnes of collectibles and things to do that don’t require extra effort, is exactly what one wants when having no time or money. I think Shadow of Mordor actually does this balance beautifully. Black Flag does not. Every zone of the world map has dozens of islands, ranging from big to small. All of these islands have tonnes of collectibles. Then there’s sea forts covered in collectibles. Then ports you can find in the open world with even more. Then there are the multiple city ports that the bulk of the game take place in, which all individually have an entire game’s worth of collectibles in each. Even the people with no time or money want to move on from a game eventually.

Now, this didn’t actually bother me that much. It allowed me to tell myself I’d never get it all and to stop caring. I just thought it was worth mentioning as I know there are players who can’t turn their collectibles instincts off. And just as with my criticism of this being an Assassin’s Creed game, this is only a general point that doesn’t really ruin the experience. My issue was with many minor micro issues that crop up. There are constant repeating issues of play within every mode of Black Flag. My disappointment with the title was a ‘death by a thousand cuts’ type ordeal. I shall list a few recurring problems here:

Now all these criticisms may seem like they’re nitpicking, but they’re really not. World traversal, stealth and ship combat are all incredibly fiddly as a result of them. Some of you may point out that all of these issues have been fixed in later Assassin’s Creed titles and that Black Flag is getting on a bit now. Which it is, as it was released on the PS3 and Xbox 360. However only a month later it was released on Xbox One (the version I played) and the PS4. There were games contemporaneous to Black Flag that didn’t have these issues. 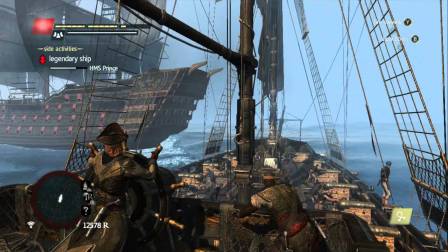 Shadow of Mordor hardly has a fantastic traversal system, but you always end up doing what you want to. You certainly don’t pop out of hiding spots at random. Ubisoft own the Splinter Cell series. Whatever I may think of certain aspects of the last Splinter Cell game, it has incredibly solid stealth systems, including the ability to crouch. Later Assassin’s Creed games got around the whistling problem simply by mapping it to its own button. None of these issues were unavoidable in 2013, in fact they should have been ironed out before the game went gold, let alone before post-release patching.  The mechanics of when you can use a fast travel point, or what is one, is hardly locked to a certain level of hardware power. It’s a menu option. Speaking of the menu…

Black Flag has the worst pause menu I have ever seen. There are all multiple upgrade pages, each hidden behind completely different sections of the menu, none in a logical or consistent manner and all under different similes. It’s a nightmare menu.

But the upgrades were worth it and improved my gameplay experience. And that’s my point here. I really did enjoy being a ninja pirate with his own customisable outfit and ship. However, every part of that fun concept has one or more caveats. I am a ninja pirate who is burdened with the dull Assassin’s Brotherhood missions. I can make Edward a total badass, but not be able to crouch on the approach to low walls. I can create a battle cruiser that strikes fear into the hearts of men, but not turn without breaking the analogue stick. Assassin’s Creed IV: Black Flag is a constant joy, but with constant let downs. Every time you start to feel the high seas in your hair, you’re thrown out of your imagination by something stupid and very fixable. There’s also the time when the game intentionally throws you out of the experience to return to the modern day, so you can play hacking mini-games in an office block…for fuck’s sake…