It looked and felt like a Bourne film, albeit with better camera work and with the politics and torture sequences of 24. Conviction was Tom Clancy video game stealth for the peak Call of Duty: Modern Warfare era. Whilst it wasn’t a traditional Splinter Cell game, it was still a very good game in its own right. 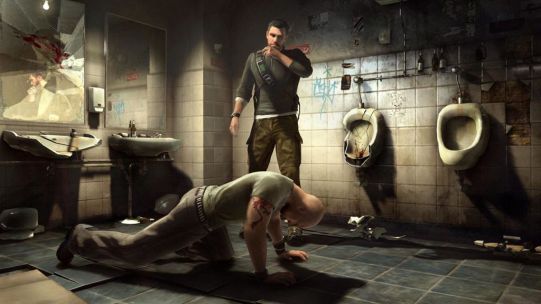 Move up to 2013 and you have Splinter Cell: Blacklist. This most recent entry into the series takes the mechanics of Conviction and molds them onto the more traditional aspects of the series. Sam Fisher is back in a black suit and slowly working his way into thoroughly guard military compounds with a low ammo count. However this time the suit is customisable in function and look, as are the weapons. And now Sam Fisher has taken a leaf from Commander Shepard’s playbook and is living on a high-tech plane, travelling the world and hand-picking his missions.

What Blacklist does amazingly is provide choices. For Splinter Cell puritans you can dump the extra ammo options, ignore extra armour choices, pick stealthier clothing and easily turn off the tag-and-execute mechanic. Alternatively you can armour up, get the meanest and loudest weapons from the armoury and go in loud, more like Marcus Fenix. Level ups in the game provide responses to how you play. If you play like a ghost (non-lethally without ever being detected) you are catered to, but if you want to be a ‘panther’ (striking from the shadows hard and keeping that aggressive momentum even after detection) you are also catered to. This is a military shooter for all sensibilities and thanks to the customisable weapons and armour you can find a nuanced point anywhere on that spectrum of violence. Even different goggle sets are available for literally different perspectives.

The cover shooting is tight enough to make you accurate, but not a God. The climbing and weapon changes can be fiddly and the default button mapping is a little backwards. The gadgets can easily turn the tide, but you start with very few. There are optional resupplies of ammo and gadgets for the more nervous players. The health regen is slow enough to make full front combat cautious and stealthy combat even tenser.

The gameplay, in conclusion, is near perfect. Ubisoft has managed to make a game experience open to everyone without removing options for the hardcore fans of the series that want a complex set of varying challenges.

The other side of the coin is the story and characters. In this regard Splinter Cell: Blacklist is an utter failure. The characters look, feel, act and just are bland. In addition to being bland they’re also annoying. Returning sidekick Anna Grimsdottir hasn’t changed her cold temperament, but unfortunately everyone else around you is just like her. There’s an annoying tech whiz kid who is supposed to be funny, but he just isn’t. He’s ANNOYING. The lack of good humour would be forgivable if the serious stuff landed well. Unfortunately the game takes itself too seriously whilst being badly plotted and written. Imagine the most po-faced and serious season of 24 with the dialogue of a B-movie or a later 24 season. And because the game is taking its dumb-serious story at face value, the main villain gets a tedious final boss fight that kills any satisfaction in finishing the game, just for ‘drama reasons’. 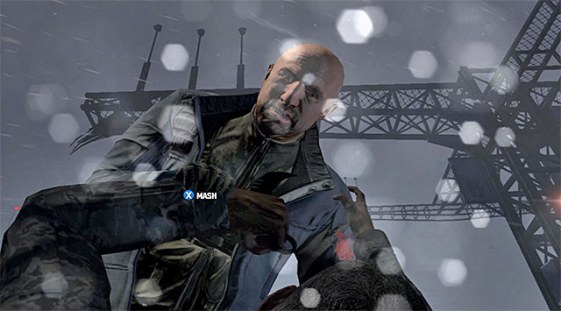 Now I hear what many of you are thinking: just skip the cut scenes. I did. There are dozens. And the development team took the ‘skip cut scene’ button too literally, because between every level is about five scenes and each one has to be loaded and skipped individually. Thankfully the game has a very generous number of optional side missions (of generous length and challenge) with no real story in them at all.

On the other hand, what about Sam Fisher? Even the now ancient Splinter Cell games have Michael Ironside bringing Sam Fisher to life, especially during gameplay. Michael Ironside loves appearing in B-movies, so surely he’ll make the terrible dialogue more fun? NOPE. Because for this game they recast Sam Fisher with a generic voice actor who is dull and wooden. The reason for the change was that the cut scenes (that I skipped) were mo-capped, so they needed an actor capable of performing feats the now ancient Michael Ironside could not do.  What about Halo 4? Master Chief and Cortana kept their voice actors whilst having mo-cap performances done by other actors, so why couldn’t that be replicated here? It is worth pointing out that the lip-syncing is a little off in Halo 4. However that game still looked good otherwise.

This came out almost a year prior to Blacklist and doesn’t look like crap.

Blacklist generally looks older than it is. It looks older than Conviction. Hell, it looks older than Splinter Cell: Double Agent from 2006. Ubisoft were obviously aware of their visual failures and the game comes with a spare disc to install better texture packs. It makes little difference. The character models still look out of date. Which is odd as there are many detailed background elements such as foliage and random objects cluttering the spaces. It looks like an attempt at a cross-gen game being prepared for the Xbox One and PS4 in 2014, but they gave up and made it primarily an Xbox 360 and PS3 game that can’t quite cope with itself.

Another memorable conversation in a grey room with screens on

To conclude I have to say this game plays wonderfully with many great options. It’s a pretty cool experience, but unfortunately it looks like shite for its age and the story is fucking awful. Enjoy the game and skip the story, as tedious as carrying that out is.