The 2009 film Sherlock Holmes is very underrated, as is its sequel. Peaky Blinders is perhaps a little overrated, but it’s still a riot. Ninjas are also well loved. So why not combine the three in a game (set long before either of these properties admittedly) and have a load of fun? Whereas I found that Black Flag suffered from having the Assassin’s Creed brand attached to it, I feel that Syndicate benefitted from it.

The assassin’s brotherhood are all about helping the helpless, rebelling against the oppressors and embracing new ideas for the sake of liberty, not control. Thus it’s perfect to set an Assassin’s Creed game in the heart of the most oppressive Empire in the world during its most oppressive time, even towards its own people. Queen Victoria may be shown as a positive figure rather stupidly, but Syndicate revels in savaging the cruel ‘Victorian values’ of the day.

So what would an assassin do during this era? Rescue child workers, incite revolution from the working class and use new technology against the industrialists. Ubisoft clearly weren’t worried about releasing a game with Marxist sentiments as you literally perform missions on Karl Marx’s behalf. The game also positions you on the forefront of a scientific revolution as you aid Charles Darwin in resisting the suppression of his new ideas. On the other side of this you aid Charles Dickens in debunking myths, urban legends and ghost stories. One protagonist takes bold steps in her personal life. She falls in love with and marries a person of colour and it doesn’t even bother her for a moment. Syndicate is a positive depiction of socialist rationalists who believe in love in whatever shape it takes. Sure, it’s ironic the game is doing this to make money for a huge real life corporation, but we live in a world when climate change denying Fox made Avatar.

These revolutions are enacted in the usual Assassin’s Creed fare. Stealth and close combat with gadgets and occasional ranged weaponry. Except this time everything works. The close combat system is simple, but requires plate spinning with brutal animations the player actually feels. The stealth gameplay is much more open and the knives and special drugs are always fun. Pulling a revolver always feels dramatic, especially during an already dramatic horse-and-cart chase. I mentioned Sherlock Holmes earlier because the game is clearly influenced by it. The protagonists use all the flair of mixing Bartitsu with revolvers, hidden cane swords and bludgeons, as well as the classic Assassin’s Creed hidden wrist blades. You can’t help but smile as cane swords slice through braces and tweed in some London back alley in the rain. Syndicate oozes atmosphere.

London itself is wonderful. It is accurately both beautiful and ugly. Shiny yet grim. Sunny then rainy. The Thames is a hive of activity, but clearly also filled with shit. You can change the political and urban landscape of London through Peaky Blinders styled gang warfare. There are carriage races, underground boxing matches, carriage truck thefts and assassinations to perform. With the addition of DLC content there are serial killers to catch and German biplanes to fight off in World War One.

It’s not all fun and games though. The game does like to get serious. It embraces the moral murkiness of the happenings. The line between hero and enforcer is often blurred. You murder corrupt cops, whilst working with clean ones whilst bribing others. You mercilessly kill supposedly evil gang members but then fold them into your own ranks without much discipline. You fight to keep London safe, but cause carnage in the streets with innocents in the crossfire. 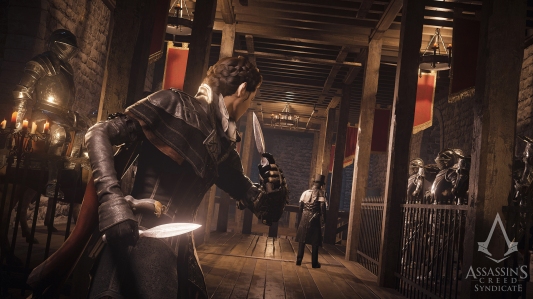 The protagonist Jacob Frye courts chaos and violence and seems to enjoy it too much. He’s a drunk and a thug and is a little annoying. However he has a naive idealism combined with a classical sense of heroism that recklessly drive he and his sister into action. His sister is the wonderful Evie Frye.

I love Evie Frye so much. Syndicate often allows you to choose which of the Frye twins you want to play as. I always picked Evie. She’s smart, sensible, dedicated, but also a little uptight and not as idealistic as her brother. She’s the less likely to run head first into danger like Jacob, but perhaps she wouldn’t get things done without him. On the other hand her outfits are much more swish. However, she is a secret romantic. She’s more inclined for quieter interests. She seems to genuinely care for others and has interests in everyone’s facets. SHE’S GREAT.

Assassin’s Creed: Syndicate does have some flaws. It plays like shit without an internet connection. There are too many collectibles again. It could do with some more polish. The range of character models is laughable. I lost count of how many bald men I killed. However, the combat, stealth, driving and world traversal is all solid. I more-or-less always did what I wanted to. The art direction is fabulous. The characters are wonderful, especially Evie. Even the modern day sections are unobtrusive. Syndicate is both a great experience and a great game all in one.

Played on Xbox One.

← The Dreaded Backlog: Horizon Zero Dawn
Guardians of the Galaxy Vol. 2 is better than the first movie (VIDEO) →