I recently bought a PS4. My intention right off the bat was to buy some PS4 exclusive games. A quick search on Google threw up some ideas on when to start. There were two games in particular that stood out: Uncharted 4 and Horizon Zero Dawn. I wouldn’t say I’m really a big fan of Uncharted (this is the part where I have to run to avoid all the rotten tomatoes thrown my way). So Horizon Zero Dawn (referred to as “Horizon” from here on out) seemed the way to go. I did initially balk at the prospect of playing an open world action RPG. These days, I find myself struggling to finish open world games due to time constraints and a little thing called “real life”. I still kick myself over not finishing or even getting into the meat of Witcher 3. However, since buying my PS4, I have promised myself to stick to one game at a time, not allow my backlog of games to increase and to persevere with a game until completion. Unless that game sucks. Horizon really does not suck.

A quick set up of Horizon’s story. Horizon is set 1000 years into the future. Civilisation has fallen due to an unknown event and now the remains of society live in tribes with barely any technology except for mysterious machines that roam the lands. The plot follows Aloy, a young huntress who has a mysterious past and whose world is thrown upside down where an evil cult threatens her people and to destroy mankind through the use of these machines. 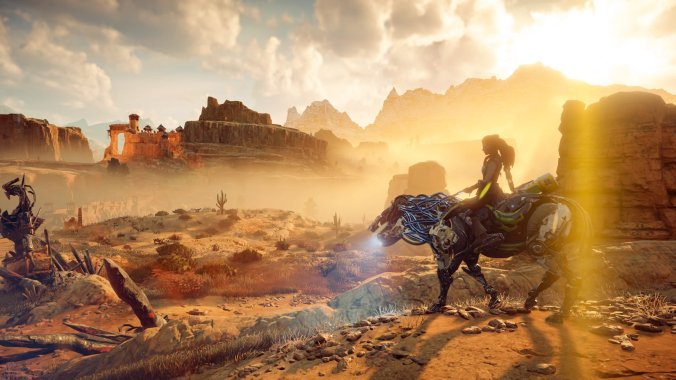 First of all, let’s get straight to the most obvious thing about this game. It’s gorgeous. Really really gorgeous. I’m not one to get excited about graphics in games but this game blew me away. Often in these sort of games, it’s easy to get bored travelling from one location to another. But in Horizon it’s a joy as you wander the various locales. The game’s world takes in forestry, snow covered mountains and desert plains and it is beautiful. All screenshots I’ve included in this article were taken by me in the photo mode with very little tinkering. However no screenshot can really capture the beauty of this game. Watch some videos on Youtube and if you get the game, go to a place that I believe is called Sheaf’s Flight which has the best vista view in the entire game.

The gameplay of Horizon is pretty standard fare for action RPG’s. You have a large open world in which you are given quests/missions to complete. There’s the main quests which advance the story as well as side quests which help build the world and allow you to advance your character’s skills and weapons. Then you can also collect items and currency which can be traded with merchants. It’s pretty standard fare. 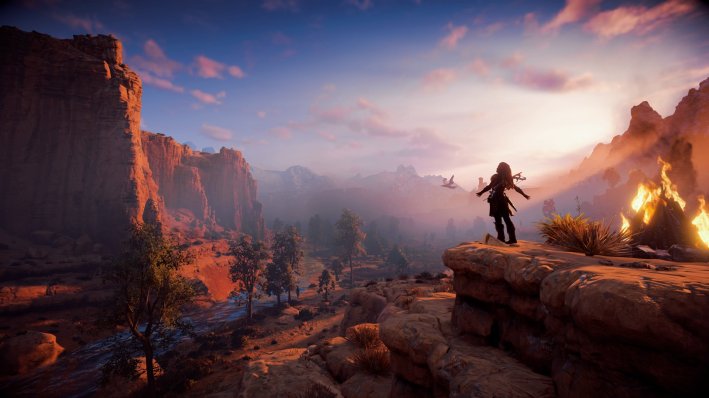 But exploring this vast world is always improved by the character of Aloy, a standout for gaming. Aloy isn’t a muscle bound hero who spouts badass one liners as she goes about killing enemies. Aloy isn’t some damsel in distress who finds herself a passive force in the game’s narrative. And she isn’t some idiot who has to have everything explained to her as she traverses the land. Aloy is a human being.

She’s not an all out muscular soldier, she’s a woman who’s been taught some basic survival and hunting skills and is now desperately fending for herself. No matter how many enemies you kill, you still have the feeling that Aloy is only just scraping by. Sometimes while on foot, Aloy will mention how the rain is soaking her clothes or how she feels cold in the more snowbound areas. It reminds you she’s vulnerable and has more dimensions to her.

Aloy is not a damsel. She can take care of herself (just about as I alluded to above). But she often comes to the aid of a variety of characters.

Aloy is not stupid and doesn’t need exposition rattled off to her. In cutscenes, she’s shown that despite her closeted upbringing, she quickly understands the lay of the land, the politics and she’s shown to be battle savvy and “street smart”. Hell, she sometimes shows off a bit of sass in interactions with characters. It’s easy to get attached to Aloy because she’s so endearing. 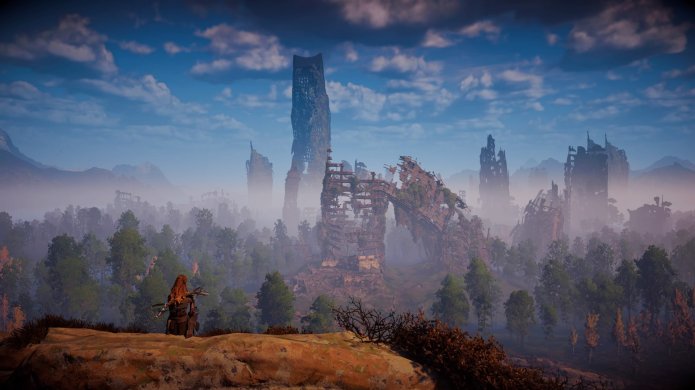 But the combat is my favourite thing about this game. Combat mostly revolves around fighting with the various machines that roam the world. These machines tend to be based on animals/dinosaurs and they range in size and strength. The smallest machine is the Strider (basically a horse) while the biggest machine is probably the Thunderjaw (T-Rex like structure). Each machine is comprised of parts which have weaknesses and strengths. Then the parts are sometimes covered in a shield like armour. Taking down a Strider is easy. It has an exposed tank on it’s back. Hit that with fire and it’s down. Taking down a Thunderjaw is a whole other battle. Take out it’s armour first, then there’s two cannons on it’s head. Take them out. But there’s also some cannons on it’s back which fires out sentient like discs that shoot at you. So you need to take out those cannons too. There’s a big spike like thing on it’s tail so you’ll need to remove that as well. The Thunderjaw’s heart is inside it’s body protected by armour so remove the armour and shoot at the heart a bunch of times and that should be it….you just have to do all that while avoiding it’s ranged and melee attacks as it charges after you. It means that each battle with each machine becomes a tactical adventure as you find what works best for taking down each machine. Luckily you have a range of attacking options to help you along the way. Aloy’s main weapon is her spear which is great for close combat scuffles with the smaller machines. For the bigger stuff you have other options. Aloy’s other signature weapon is her bow and arrow. This can be loaded with a variety of different arrows for different machine weaknesses. For example, fire arrows, shock arrows and tearblaster arrows (useful for ripping off the armour of machines). There’s also other weapons that can be used for a more stealthy and clever approach. Aloy is a hunter and she can use items such as trip wires and mines to take a machine out. She can also use a harpoon like weapon to pin machines to the ground (useful for pinning down pesky flying machines).

This means that with each enemy machine you encounter (roughly twenty); you will come up with your own different strategies for taking them out. The fun is in finding what works and what doesn’t. It means that each encounter is different and varied. And there’s always room for experimentation. It makes the first time you take out each machine much more of an achievement. I came across a “Rockbreaker” in one mission. It’s essentially a giant slug like machine that can burrow underground and is surprisingly fast. The first time I took one out, I was so proud of myself that I took a picture (see below). 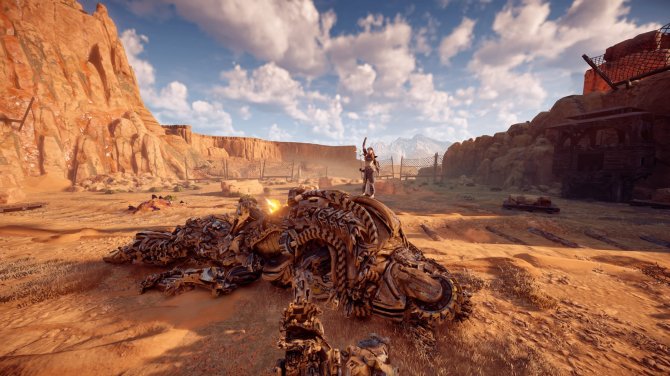 I’ve gushed about this game a lot. There must be something I don’t like right? Well there are some small negatives which I have issue with. Despite the combat being great with machines, I can’t say the same for fighting human enemies. The fights don’t have the same nuance and strategy to them. Fights with humans mostly boil down to: hack, slash, dodge roll, hack again. Done. There’s not as much freedom in the fights and it seems that every encounter with enemies ends with you having to fight a guy with a rocket launcher. It gets a bit boring to be honest.

Another thing I wasn’t so hot on was the main story quests themselves which mostly revolve around Aloy learning about the past. Sometimes they can boil down to walking through corridors and reading/listening to little data files which is broken up with a few enemy encounters. It’s not an exciting way to learn about what happened prior to the events of the game but to be honest I can’t think of much better ways to get out so much exposition outside of cutscenes. And I can understand why the developers wouldn’t want to go that route. 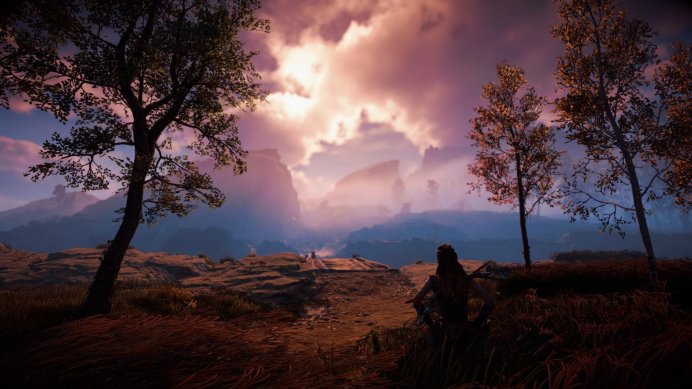 This might be one of my favourite games ever. There I said it. I love the world, the mythos and Aloy. I love fighting the machines and finding new strategies to defeat them. It was a joyful game and I took my time playing it because I wanted to stretch it out. I will be getting the expansion DLC for this game when it comes out in November. And I’m somebody who NEVER buys DLC so that should tell you something. I still have a few side missions to complete so I have an excuse to go back in and I cannot wait!