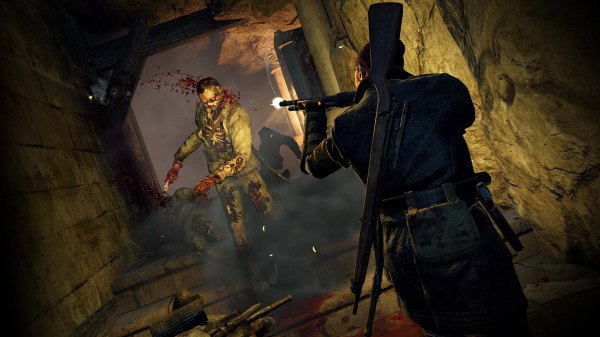 No, I am not doing an impression of a zombie and I am afraid this is going to be a very personal piece. I want the reader to understand my full meaning when I say that this game changed me and how I look at video games in general.

I never wanted to play Sniper Elite V2 again. I thought it was a great idea with terrible execution. Sniper Elite III was the great realisation of that sniping simulator concept, whereas V2 was badly designed from the levels to the gameplay mechanics. It just didn’t work how it was supposed to.

So when I bought Zombie Army Trilogy and saw relatively newer graphics I assumed it was a spin off from Sniper Elite III. I was wrong. It was in fact a HD update of two games collected together with a third new one released for said collection. However where V2’s systems were an irritating hindrance in that original title, in its zombie spin-off those same (still very irritating) hindrances add a lot to the tension and the danger. 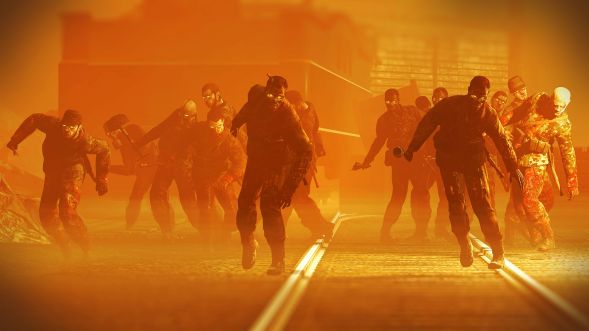 The core mechanics are the same. You have a sniper rifle and some back up equipment (a side arm, a shotgun, various kinds of explosives and so on). You must defeat your enemies without running out of ammunition and try to avoid running as an increased heartbeat throws off your accuracy. You also have to factor in distance and wind speed and shot placement for killing your targets. All the while you have to wrestle with how dreadfully designed the control systems are for each of these gameplay elements, let alone the stress of them taken all together. Your legs are essentially immobile whilst reloading. Changing between animations and actions requires the character model to practically take a holiday length pause first. Your melee attack is weak and lacks any range or dynamism.

This time instead of fighting “human” Nazis you’re fighting zombie Nazis (who by having no thoughts are technically better people). Head shots kill in one, but everything else requires significant maiming to incapacitate individual enemies. In the other Sniper Elite titles you rely on stealth, this time your opponents all know exactly where you are at all times. It is intended as a co-op title and that is exceedingly obvious when you play through the whole thing by yourself.

ZAT has no issue throwing zombies at you in ridiculous numbers. You will be cornered, you will be worn down and you’ll die quickly if you cock up. Your environments are limited and when you do get a bigger space to fight in it is only a cause for concern because it means the game is about to give you a huge challenge. The checkpoints are incredibly sparse. You have to think through the placement of your limited explosives, the various points you want to retreat back to whilst managing your heartbeat and ammunition conservation. Yet you cannot play too conservatively because you’ll be overrun before long. You’re forced to concentrate at every moment, to be incredibly patient and calm yet be ready for sudden aggressive tactical switch ups during unexpected developments. These are the basic requirements for dealing with the constant slow moving zombies. However the game loves to give you a myriad of other hell bastards to contend with in addition to the zombies.

Flaming whailing zombies sprint at you whilst covered in dynamite. Huge seemingly invincible zombie juggernauts twirl at you with chainsaws. There are creatures that create endless hordes of flaming spirits that run you down whilst setting you alight. Then there’s the Harryhausen styled skeletons (sometimes with medieval armour) that rush you. There are even monsters that sit out of ‘easy’ shooting range and constantly send more and more zombies at you indefinitely until you find a way to deal with them. Until I came to editing this piece I’d also forgotten about the zombie sniper class who cackle as they leap impossible distances from rooftop-to-rooftop. You never know where they are.

These dickheads bombard you with one-hit-kill projectiles

And then there is a type of zombie monster that for two weeks after I completed the game was still burned behind my eyes. In my dreams these creatures came walking over hills at me. Every encounter with them left me somewhat shaking. All that they are is slightly hulking zombies with heavy machine guns that walk at you very slowly. But my God are they intimidating. Every single one seems invincible as they stride through mines laden with dynamite and shrug off what feels like thousands of headshots.

I will genuinely never forget that profile

For me these huge guys encapsulate what Zombie Army Trilogy is like to play. A slow, hard and intimidating slog that leaves you shaking afterwards.  As the game is in fact a collection of three games I relaxed after I completed the first title. I expected that first final level to be the difficulty ceiling and each following game would be easier from their respective first levels again. I was wrong. The first level of the second game taught me this lesson in the harshest manner possible. When I got to the third game I thought this trend would end because it was a very different experience: they’d introduced new enemies and tech because it was made for a new console generation, rather than being a HD update of something from last gen. That first level had friendly AI and was a lot cushier to play. Except the following four levels were incredibly hard and made the previous two Zombie Army games look like piss in comparison. Some part of me is scared I am still playing that final, final level.

However, where V2 was a frustrating slog, ZAT was so much worse, yet better for being so transformative. I hit a new skill ceiling I didn’t think I could pass so often. I found new levels for my ability to overcome things that’d make me quit other games. When writing this piece I began to list and detail the various anecdotes of these specific moments and found I had too many to say and yet they’re all worth mentioning. Thus ironically I don’t have the space to espouse any of them. Being pushed farther than you can imagine became a regular expectation when I loaded the title up.

Zombie Army Trilogy dares you to adapt and overcome and transform yourself. I’d completed two Sniper Elite games before coming to this one, yet that guy who started this game wouldn’t have stood a chance in ZAT’s final level, but by the time that guy had got to the final level and became me: I could find a way to do it.

However if we sidestep my transformative gaming experiences for a moment I’d like to talk about the game’s presentation. Firstly the creature design is very, very good. Every enemy type has various different character models and all look particularly gruesome. Given the number of enemy AI you take on there is obviously repeated models constantly, not that you have time to care. Plus they’re all wearing Nazi uniforms and uniforms are hardly about creating individual looks. That being said there is more variation in character models than you’d necessarily expect.

The level design is focused. Admittedly many of the levels are just taken near wholesale from Sniper Elite V2, but the way you explore them and play in them is fundamentally different. The sound design is incredibly creepy with numerous malevolent forces beyond your power taunting you constantly. The game’s colour palette of grey, acid green and bright reds never lets you chill out. The overall production design of ZAT never lets you feel at ease even in the moments between the gameplay itself pushing you past your limits.

The designers know zombies are the least scary traditional horror monster and they know their limited scariness has had diminishing returns in the last two decades of pop culture. So they make everything else unsettling as possible. Even the menus feel creepier than they maybe need to. Every facet of this game just slowly wanders into your soul and festers.

ZAT is also very self-aware. It knows Sniper Elite games are light on plot and protagonist Karl Fairburne is more of a concept than a character. However this game fits in a few short cut scenes with Hitler and his desperation to survive the war through use of the occult. The creators knew how far to push this idea: when to make it feel serious to the player and when to play up the comedic value that’s intrinsic to this sort of material. The plot also strings the levels together in the manner of a literal journey. Karl Fairburne heads from overwhelming place to overwhelming place. This helps further the feeling of being taken on a journey. It’s a stressful adventure, but still an adventure.

A grizzled brown-haired white guy protagonist, where have I seen him before?! Wait…hold the sass…are those optional characters that are available from the get go? Including female French resistance fighters, big Russian soldiers and even repentant Nazi officers? Consider the sass retracted

If Romero and Harryhausen and Jackson ever teamed up to make a video game (with Carpenter on the soundtrack) it would be this one. Despite the game being shoddily made it feels like love was put into every part of it: from the look, to the feel, to the story (such as it is), to the sound and music and hell, even to the gore and viscera.

However, I would really never play this game again. I was transformed by this game and that is enough. I do not need to go through that stress and anxiety again. And that’s fine. Some books, films, TV shows and video games only need to be experienced once. I’m even glad I played it alone even though it seems tailored for co-op. It wouldn’t have been remotely as difficult with a friend or three. Plus the sheer amount of effort the creators put into making the player feel uneasy would perhaps be less effective if you weren’t as lonely. I felt like I was in my own private war with Hitler and his undead hordes. I was in a constant state of forced patience and never ending concentration, yet always ready for sudden dramatic hard decision making. This game broke me down and built me up and I actually feel a little upset and anxious even writing about it. I liked Zombie Army Trilogy, I think.

Played on Xbox One (and X)

One thought on “The Dreaded Backlog: Zombie Army Trilogy”