Atomic Blonde (directed by David Leitch) is a movie that adores pastiche, but it also adores subverting tropes. It borrows the visual and storytelling language of Bond films and Le Carre novels and adaptations, and then combines and rejects both simultaneously. It’s a spy movie gone rogue. 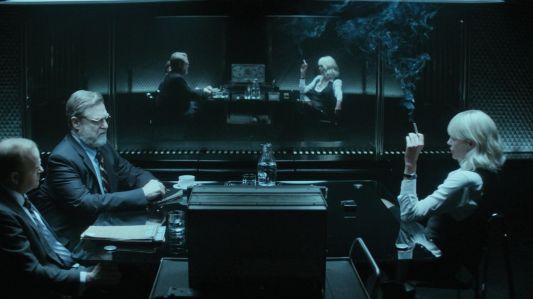 The movie is adapted from the graphic novel The Coldest City (Antony Johnson, Sam Hart), which is very much a loving homage to the classic Cold War Le Carre stories. The world and the people are every dry and most of the characters are broken down ageing Oxbridge types fearing their own irrelevance. Instead of adapting this tone and content, Atomic Blonde throws bright colours all over the screen and has constant ‘80s pop hits coming from the speakers, it’s certainly not dry. The movie bends over backwards to show Berlin as a place full of vibrant music and fashion subcultures on either sides of the wall. If The Coldest City is about people hiding their emotions behind innuendo laden and blank facades, Atomic Blonde is about people hiding their emotions behind sheer bombast.

Hence the title Atomic Blonde rather than Surreptitious Fatale.

This is a clear rejection of both Bondian and Le Carre traditions. Atomic Blonde’s scenes are loud and obvious, not quiet and mannered. The soundtrack eschews both quiet and grandiose traditional scores and settles for ‘80s pop. The cinematography isn’t balanced colour rendered through traditional film stock, but bright neon colours glaring through a digital lens. The protagonist isn’t interested in adventure or mind games, she just wants to get a job done. Atomic Blonde rejects both The Coldest City and Le Carre further by having extended and highly choreographed action sequences.

They’re also not Bond action sequences. There are no gadgets or witty one liners. She doesn’t dominate the fights like Daniel Craig’s Bond does either. Our protagonist Lorraine Broughton (Charlize Theron, the best actress around right now) doesn’t even fight like other female spy action heroes like Black Widow. Lorraine Broughton is human. She gets punched, kicked, thrown and gets exhausted and broken down. She’s a walking bruise for most of the movie.

In a lot of ways Lorraine is the biggest rejection of the texts Atomic Blonde pays homage to. Lorraine is portrayed as a well educated English woman with expertise in all forms of spy craft, including close combat. She’s also shamelessly sexual and she can hold her drink. The film is obviously presenting her as akin to Bond, but she lacks his defining misogyny simply by virtue of being female. Her rejection of these tropes extends further to her motivations. She’s not there for an adventure like Bond and she appears to hate every aspect of violence. And she’s not interested in complex ego-driven chess games like those of Tinker Tailor Soldier Spy. She just wants to get a job done. Whilst she spends much of the first half of the film as an enigma, in the second half her carefully maintained ice cold exterior nearly falls entirely apart. You can feel her desperation to get the job done as the wall comes down so she can go home. 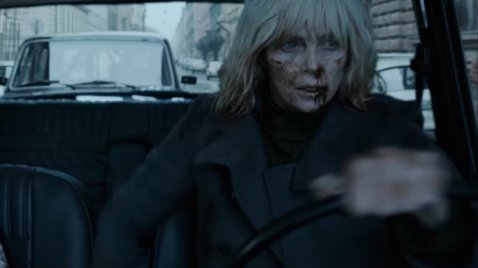 By the end of the movie it’s revealed Lorraine is a triple agent. She’s actually a CIA agent (likely with another name) who has been under cover for years. She hates all of this. Bond is motivated by a thirst for excitement. Le Carre protagonists (and antagonists) are often motivated by a need to keep their jobs and relevance going. Lorraine Broughton rejects all of this: she just wants it all to fucking end. In The Coldest City the twist is that Lorraine is a double agent working for Russia. Atomic Blonde is bluntly rejecting its own source material, but also the notion of the tradition of the English gentleman spy by making her both a woman and an American. 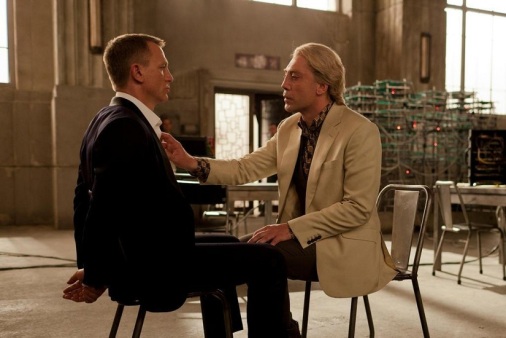 I’d talk about Lorraine being a rejection of Bond’s aggressive heterosexuality too, but it’d be pointless after the things James genuinely alluded to in this scene.

However, how does the film treat her in regards to her being a woman? Spy fiction has always treated women badly, from the obvious offenses in Bond movies to the more recent and insidious practices in bullshit like the BBC’s The Night Manager. Does Atomic Blonde reject the mistreatment of women in espionage fiction? Ehhhh, it’s hard to say.

Lorraine never uses her body to get her way with a man. She uses it to get her way with female French agent Delphine. However Lorraine pulls a gun on Delpine before sleeping with her. Once she has her answers and Delphine has calmed down, Lorraine and Delphine continue where they left off, they are forceful with each other, rather than Lorraine ‘conquering’ her. She shows genuine affection for Delphine throughout the film and pursues no one else romantically. Lorraine rejects a handful of men, always looking put-off by them and she isn’t shown as flirtatious whilst rejecting them. She just doesn’t want them. She has no interest in being their femme fatale.

The film also reveals she’s driven partially by avenging a murdered male agent she had a fling with. Eventually Delphine is also murdered, driving Lorraine further onwards. However, this isn’t a ‘Women in Refrigerators’ situation. Delphine dies on screen, fighting back and damaging her assailant substantially. Whilst one could argue even with a female protagonist a woman still has to die to motivate them, but a man also died in a similar fashion for very similar plotting reasons. Although it is worth mentioning the shameful number of non-heterosexual folk who are killed in genre works. 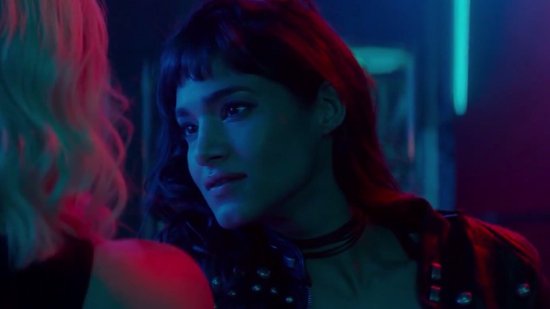 So in storytelling terms Atomic Blonde is not sexist. Lorraine begins the film as an enigma, but ends it as bit of a physical and emotional wreck. She gets to be a person even in the face of being a pretty person in a hyper-stylised action movie. That being said, there is some degree of male gaze to debate within that hyper-stylisation.

There are a lot of sequences of Lorraine either undressed or getting dressed. Many of these sequences are perfectly neutral, giving us important information such as Lorraine putting on a wire or showing the extent of her injuries. However often she is just getting dressed to cool music. The second half of the film relents with these moments when things start to go wrong for her.

One could argue the film is depicting Lorraine’s careful repeated construction of an ice cool facade, one she can’t keep up when shit gets real. However, one could also argue this idea could be executed without seeing a woman in and out of her underwear. Either way, it is debatable and complex. She’s at least not a ‘Fighting Fuck Toy’. In regards to Lorraine’s sex scene with Delphine, well I’m male, so it’s impossible for me to gauge the authenticity of a lesbian sex scene. Soz.

At the very least Atomic Blonde is trying to reject the negative espionage tropes related to women, even if it debatably fluffs up much of the execution. 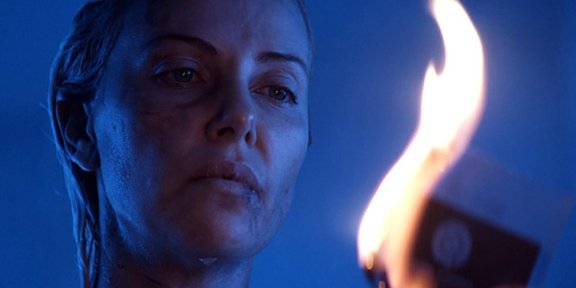 Atomic Blonde is like its protagonist, it has attitude. It steals the basic structures and plot beats of beloved spy fiction and finds small and big ways to rebel against these very same pieces of fiction. Hell, the movie even announces this. Between two scenes the movie cuts to contemporary news footage of the debate in music over whether sampling is ‘theft or art’. This point is driven home by Atomic Blonde’s soundtrack not just having ‘80s pop classics, but modern covers of ‘80s pop classics.

Is Atomic Blonde’s sampling of Bond and Le Carre plots theft or art? I don’t know. But it certainly went rogue with it all. The movie has so much of a rebellious attitude that it announces its pastiche, encourages debate and then asks you to deal with it.