Sometimes when you play a video game a thought occurs. “I’d like this as a film.” Or you imagine it as a TV series or a comic. I thought that whilst playing Mirror’s Edge. In fact I thought I’d prefer Mirror’s Edge in any other medium than video games. And that’s not great to realise when playing through a video game.

Mirror’s Edge is unique however. First person parkour is something only one other game has done, and that is a later reboot of this game. These mechanics could never be as breathtaking in third person perspective. Your heart will never pound as fast when pursued by bent cops if it weren’t as though you were seeing through your own eyes. However, eventually your heart stops beating fast anyway. That’s not because you get used to the rush, it’s because the game gets so infuriating it is better to deliberately not care. 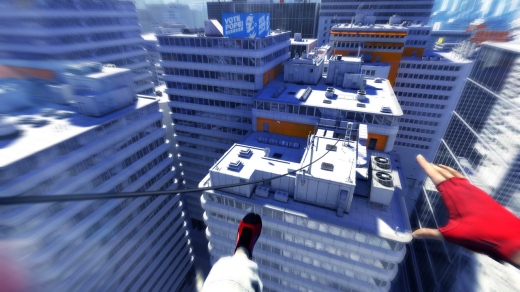 This game doesn’t work properly. It doesn’t play as intended. Jumps and grapples and vaults and whatever all fail constantly. Nothing gels together. This is a game where the magic comes to life during moments of constant movement. Except that animation triggers or jump lock-ons don’t work. Or they work too well and you don’t do the exact thing the game wants and you end up either falling to your death, or dying from entering a no-go area: “free running” indeed. Imagine trying to play a Sonic game for the first time, but on the hardest difficulty. It’s too fast to cope with, it seems to screw you over constantly, it won’t tell you what it wants and if you slow down enough to think the illusion collapses. Hell, in the final level I was stuck in once place for thirty minutes because there was a move the game hadn’t taught me and I’d never had to use before. I’d used a similar move, just not in that exact way. Whatever.  Also some of the ‘combat’ sections reach truly ‘fuck you’ levels of contempt for the player. Especially if you do the ‘no guns’ run through as I did. The game has five combat options: Hit from the air, hit from on the ground, hit standing, a simple counter or shoot a gun. There is no stealth. Enjoy. 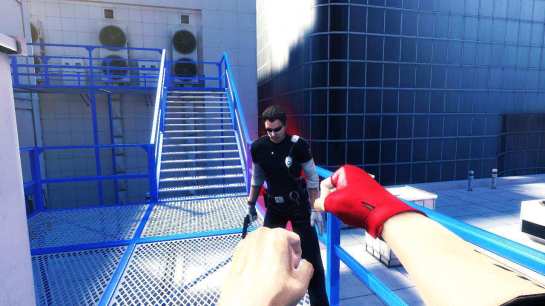 Above: One fifth of all the combat options in the game.

I did actually like this game overall. The animated cuts scenes are cool. The world design turns budgetary and technological limitations into minimalist art. It’s beautiful, but feels oppressive as it is supposed to be. When the game does what it is supposed to it does really come to life. Faith has a good visual character design. It’s a bad game that has good experiences inside it. Perhaps why I’d love this visual palette and story applied to film, TV or a comic? Those pockets of red in vistas of white is an iconic modern video game design.

However, they’d have to adapt Catalyst rather than this game. Because this game has nearly no story and essentially no characters. Everyone, especially Faith, is a cipher. And story and character is important in a game than leans this much into the experience side of things. It’s doubly important when your game is about those defying faceless corporate fascism. A lack of personality doesn’t fit well in a story about fighting against the destruction of individual identity. This would all be far more crushing if the art design was just even slightly worse. In fact the only idea I liked was the idea of Faith as an illegal postman in a dystopian future. I wish the original game ran away with the idea as much as Catalyst did years later. This game just has an uninteresting conspiracy/rescue plot and uninteresting betrayals. At one point you do a daring rescue of your sister only for her to be kidnapped again. Clearly something wasn’t given enough time to be finished in between there… 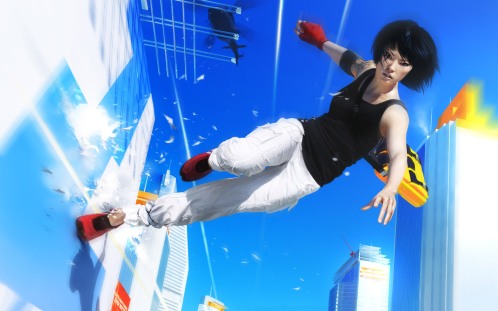 It’s a shame. I loved Rhianna Pratchett’s work with Tomb Raider and Rise of the Tomb Raider. There’s very little to Mirror’s Edge. The campaign is very short, yet I wished shorter by the end. The idea of a first person parkour game is great. I’d love to see it elsewhere, not just in the dystopian Sci-Fi world of Mirror’s Edge. However that very same world does stand out. It establishes itself well even if it does nothing with it. It is also worth mentioned how progressive the character design for Faith was for the time. She’s not a white man and her build is realistic to her physical activities. Mirror’s Edge is at least better than the sum of its frequently very shitty parts.

← ‘Billy’ and the violence of Angel
Atomic Blonde: A Spy Movie Gone Rogue →

One thought on “The Dreaded Backlog: Mirror’s Edge”