Half of Red Faction: Guerrilla is an opportunity to be the best game ever made with the other half being the opportunity to be one of the blandest. The game manages to be halfway between these two potentials and just be ‘alright’.

I was somewhat raised on this franchise. I recall the demo for the original game coming out for PC and then playing said PC version. I also remember a surprisingly decent PS2 port some time later, or at least I remember it being a decent port. It was a first person shooter franchise known for three things primarily. The games usually took place on Mars, the plot revolved around pseudo-communist rebelling workers and the majority of terrain was destructible, they called it ‘geo-modding’.

They were good games. With 2009’s Red Faction: Guerrilla the action moved out of caves into an open world that is viewed from a third person perspective. You now play as ‘Alec Mason’, or Blandy McBland Face. Buildings are now destructible with terrain being mostly the standard video game invincible. Ironically this is the opposite of the original game.

Play-wise there is a melding of cover based shooting and run-and-gun tactics. I often found myself running into fire, out of fire, holding my ground, doubling back and hammering my way through walls to flank people. For the first six hours of playing the game perfectly encapsulated being a guerrilla infantryman with laser guns. Commie Star Wars on Mars is actually the greatest idea ever.

However, eventually the game threw enemies with huge shields into the mix. Unfortunately these men required headshots to kill or use of explosives. For reasons I’ll get into in a moment, explosive weaponry is too valuable to use on these men and the game’s aiming systems (on console anyway) aren’t competent enough to make headshots a fun challenge. Thus I stopped engaging with enemies and stuck to running and hiding and using jammy tactics that aren’t in the intended spirit of game-play. 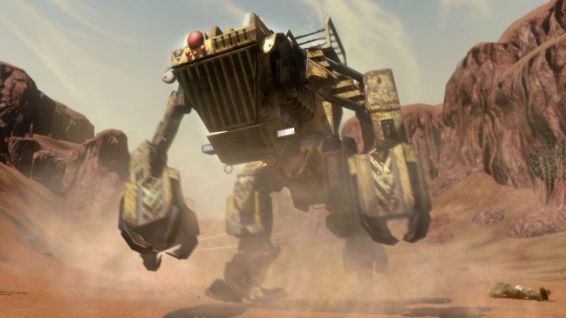 Then there is the vehicle game-play. This being part of the beginning of the explosion of open world games in the late 2000s, there is of course lots of driving. Except the driving is never satisfying. Vehicles do not feel distinct enough from each other to drive. Driving fast never feels or looks dangerous or thrilling even when a single collision could kill you. Vehicle combat is also tedious. You’re either so overpowered you might as well be playing a Call of Duty on-rails section on easy, or your defences are so weak that being overwhelmed is inevitable. That being said, the game makes allowances for your style of play.

The campaign is essentially about clearing different regional zones of Mars. Even zone is visually distinct (to a degree) with various objectives in. You have to lower the strength of the enemy whilst raising the strength of the rebels in the area. You can choose what sort of missions you want to do to be able to achieve these goals and the game generates spontaneous events, such as an enemy strike in your territory, that also help. Rather than being tedious this does actually create more of a sense that you are actively engaging a reactive force, not just clearing a map of busywork. 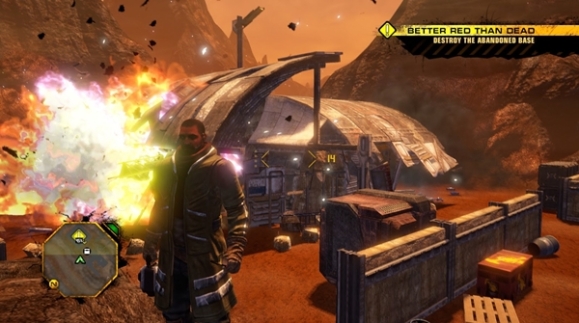 Some of the side objectives are mini-games designed just for fun. My favourite is one wherein you have to bring a certain building down in a small time frame with limited explosives. You have to work out the physics of how to use a building against itself whilst working out how to enact that plan in a certain order to not run out of time. These missions are optional, but also one of the best things the game has to offer as a whole.

As a complete package the game’s overarching story is sketched so thin, with thinner characters, it is not worth talking about. There’s enough to care about and invest in the war and nothing else beyond that. That’s okay in a game which is really about having fun with different ways to blow buildings, vehicles and people up.

On a technical side the frame rate can run as high as 60 or as low as around 20. The mountains in the distance phase in and out of view in a distracting fashion that makes me long for poor distance masked by fog. That being said, I played this on an Xbox 360 and this is a game running a lot of systems. Many of them being systems modern game developers would struggle to make function on a contemporary console.

I liked Red Faction: Guerrilla. Some of it I loved and some of it I hated. Sometime I was laughing with joy and sometimes it made me infuriated. Time and time again the game’s systems screwed me over, but so many other times I had the joy of being backed into a corner and being forced to adapt and overcome.  Good stuff.