I’ve never played a ‘walking simulator’ before. I’ve always been interested in them, but never found the time to have a go. Virginia is known for not being your average walking sim (or so I’m told) because it has hard cuts. Much like the cuts between scenes in TV and film. Also like film Virginia opts for expressing itself visually. None of the characters speak, but the musical cues and character actions tell the story.

This story is about a town in Virginia, shockingly. The game is clearly influenced by The X-Files and Twin Peaks. There are weird things going on in a small town and an FBI agent has to sort out the truth. There is also the B-plot of your character bonding with your partner. This process is slow, emotional and goes wrong a lot. The hard cuts keep the story flowing and the game is programmed to cut once you find a certain clue or hit a certain emotional moment, exactly like when a film or TV scene cuts at the peak of the drama. It’s effective and keeps the game’s runtime to a merciful two hours.

Why is a two hour runtime merciful? Because by the end of Virginia I was sick of it. Don’t get me wrong, it’s a unique experience that I will never forget. I enjoyed a lot of it. It definitely knows the basics of structure and knows how to do complex visual storytelling that is easy to grasp. I did feel things during the game, but by the end I felt mostly confusion.

Virginia’s ending was divisive. When researching what the hell I had just witnessed/played I immediately went online to see other reactions. Without giving detailed SPOILERS the ending is essentially a ten minute montage/acid trip. The character half sees possible truths and half sees reality. Sometimes she dreams one solution to the case and then dreams another solution. In between these moments there are linking visuals that are equally surreal and occasionally not surreal at all. All of the presented solutions completely contradict each other and the linking sequences can belong to any and all of said solutions. Essentially it feels like untangling a 3000 foot deep box of wires.

There is no official canon ending. The developers had one in mind but refuse to reveal it. Reviewers and fans on the internet have provided many different theories; all which contradict each other and many have internal contradictions in themselves. None account for everything seen. Ambiguity like this is tricky. First of all the way it is delivered left me confused rather than emotional at the climax of a personal story. I literally didn’t know what was going on and so I didn’t care. Even if this ending is intended to leave you confused, it is hard to unpick a particular thread. The thing with ­X-Files and Twin Peaks is that their ambiguity still spelt out statements and themes about certain topics. Virginia is a pastiche of these shows, but doesn’t have their themes or ideas. It isn’t saying anything about small American towns or the nineties or even religion (there is religious and cult imagery). Everything in the game is designed to serve a character driven story that is deliberately without an ending.

The developers claim the player is supposed to come up with their version…fuck off. That’s not art and/or entertainment. That’s overused ambiguity in the guise of intelligence. Frankly it seems more like an attempt to generate conversation around the game and thus generate sales of the game. Don’t give me a focused character driven story and then throw a disconnected montage at me and tell me to do research to invent my own answer. That would be smart if Virginia was trying to say something about society or religion or whatever. Because then every player would bring a different perspective to it from their background, but that’s not what the game does. Any speculation is ultimately devoid of meaning.

The art is stunning. The soundtrack is haunting. The character work (before the ending) is phenomenal. The cutting is effective, although at two crucial moments I didn’t get a chance to see relevant exposition because the zoom in button was functioning as the skip scene button and this ruined immersion. I found myself often looking up the piece of info I just missed from Letsplays. I have a film degree and I love artsy films even when I hate them. Avant-garde is just fine with me. However to make artsy stuff you have to have point or have to say something. Otherwise it is just the pretentious shite that walking sim haters say it is. 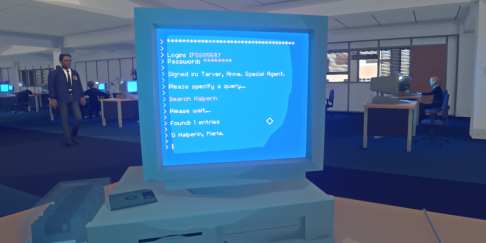 I honestly had so much good faith for the game I felt like the final moment would be the main character upset from failing to solve the case. I hoped the point of the game would be that it isn’t satisfying. To put the player in the shoes of a detective who simply doesn’t have the evidence to finish a frustrating case. But that’s not how it ends.

Thank fuck it was only two hours long.

One thought on “The Dreaded Backlog: Virginia”