‘No! No, no, no! Don’t say ANYTHING I haven’t watched it yet!’ The past few months in particular have housed this broken record as its soundtrack. It’s been, what, 10 days now(?) since the Game of Thrones Season 5 finale, so I think it’s safe to say spoilers are allowed, right?

When are spoilers ‘allowed’? Of course, if you’ve been specifically asked not to mention them in conversation with an individual to which you are discussing said show, film, book, etc., to break that ‘rule’ is nothing short of awful and destroys bonds between family, friends and lovers more brutally than Monopoly ever did.

For example, (AHEM – SEASON FIVE SPOLIERS AHEAD) my friend and I were discussing the controversy behind THAT Sansa and Ramsey scene, and we’d both acknowledged that the backlash was in no part helped by the fact that it did not actually occur in the books, written by George R.R. Martin, that they base the show on. I added the point following to our conversation: ‘Yeah, it’s like, in the books Ser Barristan Selmy didn’t die! The actor who plays him was devastated.’ Then, there it was, that look of utter betrayal; all innocence and hope lost. He was Jon Snow and I, Olly, (the little shit) stabbing him in the gut and watching the trust leave his eyes. But in this equation, I was the traitor and he was a very unhappy bunny. ‘I- I… I haven’t watched it yet, I‘ve read the books so I figured I’d know all the spoilers… He…he dies?’ Shit. 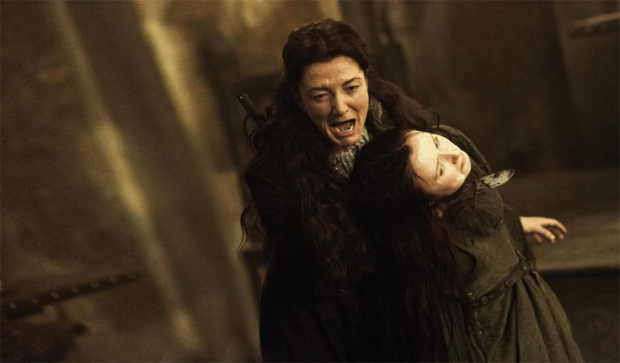 Not even an exaggeration in his reaction

(And BREATHE. Spoilers over.)

But this exchange opens another can of worms entirely, what are the spoiler rules for book to TV/Cinema adaptations? Do you have a specific time frame to adhere to? And surely, a slip up in conversation is entirely different to posting spoilers online? There is far greater audience reach than just you and your friend (you may end up with a mob on your hands) and you open up that conversation without consent, without opportunity for others to say ‘No! No, no, no! Don’t say ANYTHING I haven’t watched it yet.’

In the PBS Idea Channel video titled: ‘Are there rules for spoilers?’ Mike Rugnetta talks about how opinion on spoilers is varied – spoilers are more ‘a choice to be made’ rather than ‘a bad thing to be avoided’; and that the best way to keep everybody happy is to discuss where everybody is at in the show and their position on the ‘spoiler scale’.

With the introduction of streaming platforms such as Netflix, offering their original shows to be consumed instantly season by season, spoilers are becoming even more complicated. With a lack of the week by week buffer, a show that could take someone two days to watch, takes someone else two months. Which is fine, if were all being courteous to each other and assessing where we lie on the spoiler scale in friendly conversation, but doesn’t really work in online platforms, where anyone can say, anything. Nobody in the land of internet cares for your spoiler morality or lust for first-hand experience, they don’t know you – they just want everyone to know, that they know. The ‘I haven’t left my bed for 48 hours and watched the whole damn thing and I deserve some kind of medal for it’ gang.

There are arguments that suggest that ‘knowing what happens’ before you read/watch a media text only improves the experience for you, however, I feel that that is a decision for you to make and not someone to make for you. Unfortunately, unless you red flag certain tags and topics in your social media circles, or, throw your wi-fi router out the window, avoiding spoilers online is like buying a one-way ticket to Mars – pointless and maybe a little too optimistic.

(Side note: Spoilers don’t count if it’s old as balls. Romeo and Juliet kill themselves. Darth Vader is Luke’s father. And Bruce Willis… wait no, nonono, I haven’t seen Sixth Sense, don’t tell me ANYTHING)