Far Cry 4 is not as old as Lego Batman. But it is certainly a game that took me longer to complete than it should have done. Six months to be precise, chalk it up getting distracted by various other distractions in this thing we call life. I had a similar experience with Far Cry 3. A game that I couldn’t get round to completing. It didn’t help that the game itself was a pretty huge open world affair and I have a personal policy of never using fast travel in these sort of games. I never finished Far Cry 3 despite enjoying what I played of it and it seemed that Far Cry 4 was going down the same route until i managed to finish it up over the course of the last 2 weeks.

If you know anything about games then chances are you know what the Far Cry series typically involves. First person shooting in an exotic setting of some kind (in this game, a fictional country (Kyrat), in the Himalayas). You’ll be working for/against a bunch of shady individuals to complete your objectives where stealth is encouraged though not actively discouraged in your pursuit of glory. Go in armed with only a knife and a bow and arrow for silent killing or ride in on an elephant gleefully shooting an M60 from your waist while chucking grenades at people. The choice is yours.

That’s my biggest attraction to Far Cry 4. The sandbox approach to this game allows me to complete objectives in whatever way I want giving me multiple ways to tackle an objective and giving me an incentive to replay missions so that I can experiment and generally “piss about”.

Give me an enemy stronghold and I can eliminate everybody in there in various ways, I can parachute in from the sky, bust the doors down with an armoured jeep or use the secret entrance that I found around the back. Once inside I can use my flamethrower to torch enemies till they’re crisp, I can shotgun them all to Hell, or I can be lazy and attract a bear to the area so it can round mauling everyone while I sit on a roof and laugh. Far Cry 4 gives you a playground full of toys and it’s up to you how you want to implement them.

The world in which you play around looks very very nice. It’s nice to see a first person shooter that isn’t in the Call of Duty mold and gives you endless browns and greys to look at. The fictional country of Kyrat is a vibrant world full of lush foliage, exotic animals and ever expanding scenery. It’s a joy to explore whether by car, boat, gyro-copter or wing-suit.

My main problem with Far Cry 4 is in it’s story. It’s not particularly engaging. The developers clearly wanted you to fall in love with the main antagonist of the story, Pagan Min. Clad in pink with a funky hairdo and witty dialogue like he just stepped out of a Joss Whedon series. Pagin Min was all over the marketing for the game so it’s surprising that he is used so sparingly in the game. Perhaps the developers thought that we would be more memorable if used in small high concentrated doses. Unfortunately it doesn’t work and outside of 3-4 cutscenes, Pagan Min is just a voice on your radio who pops in from time to time just to remind the player that he exists. It doesn’t help that your character, AJay Ghale, is terribly bland. I can understand that trying to make a character we never see (all cut-scenes are from first person perspective) interesting is a hard task. But Ajay’s role in the story is too passive. He is merely a guy who finds fighting for a group of rebels against “King” Pagan Min for control of Kyrat.

His only agency in the game is through several “Gold Path” Missions in which Ajay is given two different choices for how he tackles missions, choices that are spearheaded by his two allies, Sabal and Amita. For example, Sabal has gained intelligence that a drug factory is operating down the road. Sabal wants you to go down there, kill everybody inside and blow up the factory and drugs so that they cannot poison Kyrat. Meanwhile Amita offers you the option of going down there, killing everybody inside and keeping the drugs so that they can be sold for money to buy more weapons for the rebellion. However, it seems that no matter which choice you make, it has no bearing on the world around you. 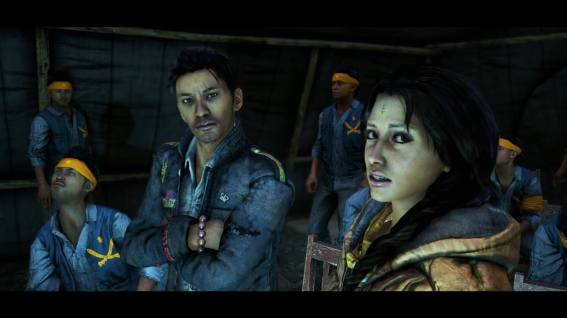 To be honest there are many other of these sort of games where your protagonist has no bearing on the world around them through the choices that they make and it’s something I hope more games try to rectify in future. (Ubisoft’s recently announced Ghost Recon: Wildlands claims to be fixing this but we’ll see how that goes)

Despite these flaws, I still think Far Cry 4 is a strong  addition to the series. Even if the story isn’t enough to get you interested, there’s still plenty of side missions to keep you busy (though maybe some of them are duds – I’m looking at you, Yogi and Reggie!) and there’s plenty of options to complete them. I still get a kick out of stabbing a guard in the back with a knife even though I’ve done it about 500 times.