Every so often this debate rears its head. Everyone has a different opinion, all of them strong. If anyone thinks this argument will immediately go to Star Wars due to its excessively larger popularity I suggest you stop reading now, there will be no arguments appealing to popularity here. Given this is a nerdy topic I guess I’ll have to list my credentials for fear of immediate dismissal by Internet pedants:

The one thing that all this has taught me about the ‘Star Trek Versus Star Wars‘ debate is that it is dumb. Like really dumb. Star Wars is a primarily film based Sci-fi franchise with one foot based in the fantasy genre. It is driven by the archetypal ‘hero’s journey’ and concerns itself with simple themes of good versus evil designed to deliver large and exciting action pieces. Star Trek is a primarily television based Sci-fi franchise with one foot based in actual scientific, political and sociological thought. It is about pointedly egalitarian explorers finding out about new life and cultures in ways that are often designed to comment on humanity’s own different cultures. There is some action but the themes of Star Trek usually deal with the idea that diplomacy and respect is the best method by which to achieve your goals. When there is violence it is restrained and not just because of a TV budget, but because it is portrayed relatively realistically and has more obvious consequences and rules to it.

No offence, but they should be already burnt to a crisp.

These are both clearly two very different franchises, so why do we draw comparisons between their strengths and weaknesses? Not to be reductive but it’s most likely because they are two hugely popular science fiction franchises, with intense cult followings beyond the generally popular following, that both have the word ‘Star’ in them followed by another striking single syllable word. That is most likely why. However comparing them is like comparing The Dark Knight to The Incredibles. Yes, both are in the same larger genre, but both are in different sub genres of superheroes (vigilantism and superpowers). They are made in different styles (live action and animated) and deal with violence and adventure in incredibly (haha!) different ways. The character work and humour are different and both are excellent in their own way whilst being completely different at doing something too easily considered ‘similar’. So if I am to argue which of the two Star franchises is better it will be all opinion…

So Star Trek is better. That is my belief. I shall now justify it with likely flimsy personal views.

Like anyone with access to a TV and a video rental shop as a child, I loved Star Wars. Until I was 17 it was my favourite thing in the world. As I established previously I loved all the films (yes, even the prequels, I’ve grown since then…) as well as all the other Expanded Universe merchandise. Then I started to watch Star Trek. It was a few months before J.J. Abram’s 2009 ‘pre boot’ was to be released so I wanted a better understanding of the significance of the new film. Star Trek instantly overtook Star Wars in my heart, instantly. Then I wanted more. And over the years I watched it all. (My favourites are Next Gen and DS9, Voyager seems most pointless to me.) So my first point is to say that is a strength of Star Trek, it overtook an obsession I’d held for over a decade with relative ease. This leads me to my second point. 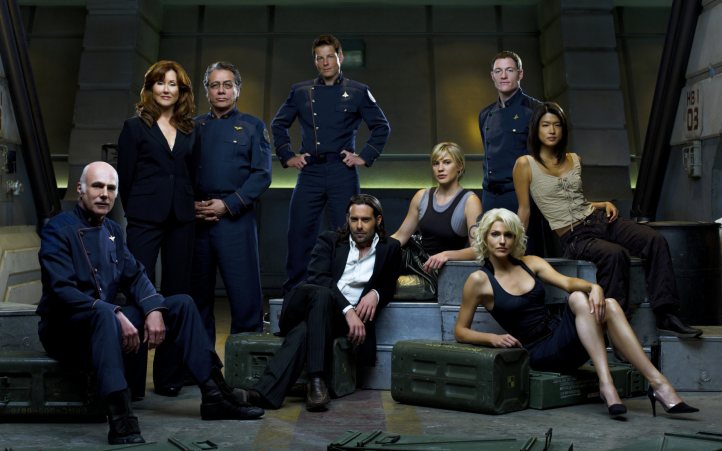 Even this wasn’t a great enough challenge to my original love.

“Watch more Trek you must.”

Star Wars‘ strengths lie in its simple storytelling about adventures concerning itself with good against evil. There is thrilling action and heroic deeds. However Star Trek has done this also. Many of its episodes are dedicated to adventure plots as well as several of its films. In fact this argument clearly points out that Star Trek is multifaceted and is capable of action and adventure, comedy and romance as well as serious analogy based Sci-fi concerned with the nature of humanity and the Universe. Yeah Star Wars has lightsabers and the Millennium Falcon, but Trek has The Enterprise, transporters, warp drive and Jean-Luc Picard.

He’s cooler than any lightsaber, or any weapon for that matter. And he’s a “damn sexy man”.

Star Trek also existed before Star Wars. You could argue interest in Trek has been resurged due to Star Wars‘ popularity more than once (with the 1977 film leading to a renewed interest in a Trek film release and Star Trek (2009) owing stylistic elements to Star Wars) but then you’d be ignoring the fact that film and televised Science Fiction wasn’t taken seriously outside of children’s shows until Star Trek came along. Would Star Wars have gained such popularity if Trek hadn’t created a world where cinema going adults take Sci Fi seriously too? Probably not. No one would have turned up at the cinema to give it a chance.

Finally, let’s look at characters. Luke Skywalker is the heroic archetype, Han Solo is a rebel, Obi-wan Kenobi is the wise old wizard and Leia is the Princess. Beyond that they are all fairly thinly portrayed characters with little personal development beyond their archetypes. The prequels don’t even rise to that level. Now I’d be lying if I said Star Trek has great character work across the board, but it has more than Star Wars going for it.

We have James T. Kirk and his gung-ho spirit that is dampened by his fear of ageing and death. Spock is trapped between two cultures and two emotional states of logic versus passion. Jean-Luc Picard is a character with detailed and believable foibles; he can be tortured into submissions, has experienced PTSD at the hands of the Borg and ultimately has a adventurous spirit tempered with cynicism and exhaustion. Benjamin Sisko is a loyal Starfleet officer who dutifully believes in The Federation but is frequently forced into cruel utilitarian practices to defend it. He also has a vengeful and rage based streak to himself in addition to frequently failing in his fatherly duties. Data is an android who wishes to be a real person with ‘a soul’, but does he already have one simply by having the desire to have one? Kira Neyrys; is she a terrorist or a freedom fighter? Does she protect the rights of the religious or is she curtailing them? She is constantly racked by vicious anger and guilt that leaves her both vulnerable and shut off.

Plus Trek doesn’t have any characters whose depth was robbed in later video and DVD releases.

I could go on about many more complex characters present in the Star Trek franchise but nobody wants that.

Just like nobody wants more than one episode about Harry Kim.

In summary I have to say a few last things. Firstly, if you are a Star Wars favourer that dislikes my reasoning because a lot of the criticisms are based more in the prequels than they on the original trilogy, I’m sorry, but you can’t just pretend the prequels didn’t happen. Just as a Star Trek fan can’t pretend The Final Frontier or Into Darkness didn’t happen. I could take that logic further and start weighing up every achievement and failure by each franchises against each other but that would be dumb. 1) There is a lot more of Star Trek. 2) That would take forever. 3) As I’ve said before they are very different properties. They simply shouldn’t be compared (I am aware of the irony of me saying this). This should be evidenced by the fact that whatever you say in the debate to argue your case is exactly that, you are arguing your case. You are literally just telling people what you prefer to get from Science Fiction, not what is objectively better. Now yes, obviously every opinion is subjective, but when you try to justify two fundamentally different properties against each other the word ‘subjective’ takes its meaning to a whole new level. Star Wars is about the timeless battle of good versus evil. I prefer Star Trek because it asks what ‘good’ and ‘evil’ even are, why they are so opposed to each other and the details of the different ways those oppositions can play out.

“There will be no court dramas here, only pain.”

P.S: I didn’t go into detail about iconic alien races, planets and technology simply because both franchises have tonnes of iconic alien races, planets and technology. Just as both have intense and rabid cult fan followings. Yes, people perform Shakespeare in Klingon, but people also put ‘Jedi’ as their religion in census’. I also didn’t discuss video game quality because both franchises have their gems and plenty of rough too.

← The Pied Piper of Yosemite
He who shall not be named →