It’s safe to say I did not love Limbo. I felt it wanted to employ a minimalist storytelling approach whilst also operating as a platforming puzzle game and in trying to be both it succeeded at neither. However, I did not feel this way about Inside. Due to Inside being very similar in style and tone to Limbo, albeit vastly more successful, a lot of this blog post will be me comparing the two. I do not intend for this to be taken as a series of slights aimed at Limbo, but more an exploration of how a game studio took the framework for a great video game and improved upon it vastly.

Inside is very similar to Limbo in that the exact details of the story are only ever hinted at. A young boy is on the run from the excessively violent authorities. As he continues to flee he encounters zombified humans operating under hive mind control systems. The authorities are also running cruel experiments and everything screams police state. Eventually the boy encounters ‘the huddle’ and merges with it. There are multiple ways to theorise what is happening here. Has this police state developed the parasites seen in the game as deliberate mind control? Is it an alien invasion gone wrong? Are the parasites innocent and just being taken advantage of? Or are the parasites controlling the police state and they’re done the experiments? Is the boy under the control of the ‘huddle’ all the time from even before he merges with it? And so on and on.

I criticised Limbo’s vagueness because it doesn’t actually do or say anything or a narrative or thematic level. A boy heads through a series of unrelated scary environments with no logical links and then rescues a girl or something. Is she his sister? Who is she? Who cares? We’ve never seen her before and thus only glean a motivation for our protagonist once the narrative has concluded and thus too late to truly care. Limbo operates on this pure video game idea of the boy always heading from left to right as if pulled by some unseen force. This is a nice meta-idea that contributes somewhat to the mood of the piece, but it’s ultimately empty. Alternatively Inside creates an immediate threat of dangerous men and their dogs chasing you. The further you run the more the nature of the threats escalate, but you can’t go back either as that’d result in immediate death from what’s behind you. As you continue from left to right this time you learn more about the world. There is a logical order to the environments and could conceivably exist in a real world. As I said you never learn exactly what is going on, however, unlike with Limbo, here there is a strong core story and character motivation for what is occurring. You don’t know what the evil scientists want, but they kill you if they catch you. The game slowly introduces more and more layers to the parasites and the nature of the mind control technology. So by the time you reach ‘the huddle’ the idea that you’ve been psychically pulled from left to right the whole time actually makes sense on multiple levels, if you’re a fan of that theory anyway. It makes sense emotionally as you’ve been given context.

Limbo is bare bones ‘mystery box’ storytelling at its laziest: you’re told there’s a mystery that will reveal itself and so you push on with the plot, ultimately the mystery isn’t that interesting and you’re left with no other feelings to associate with the events you proceeded through, as you were only ever given vaguely defined intrigue. Inside is an actual mystery based thriller with ideas and themes. Again, regardless of what theory you may personally hold about the events, the core story always reflects the same core themes. You are invited to sympathise with the mind addled zombie people and then in turn ‘the huddle’. Despite the evil police state/scientists being seen as a unified collective, they are depicted dispassionately. As ‘the huddle’ reaches the sun at the climax of the game it feels more humane than any human in the game. Regardless of your interpretation of the events the game is hinting at the idea that unity in co-operation and safety is preferable to unity in the pursuit of dispassionate cruelty. The boy is only complete in his ‘journey’ when he ceases to be an individual just trying to survive, but joins with the huddle to escape to the safety of the sunshine. So the game isn’t espousing the individual over the collective, but a certain kind of collective over another. Then in addition to this is the interplay around agency and self-determination within these collectives, given that this game sure has a lot of mind control devices in it. Limbo is stripped down to just pure mood without meaning. Inside is also stripped down on every level, but its stripped down character has an arc that reflects the themes, however simplistic they may be.

Inside’s gameplay is also contexualised through the story. You don’t come across a random spider and a random bear trap like in Limbo. Instead every object in a puzzle has a logical reason for being there. The myriad ways you can die are also connected to the story. These scientists that are after you are performing cruel experiments that can easily kill you, there are wild animals everywhere because society has collapsed to some degree and you use mind control puppets to solve all sorts of puzzles because this is a story directly involving mind control. These puzzles are usually things as simple as getting through a blocked door or a ledge or rope that is out of reach. There aren’t some random giant cogs to jump onto just because. Inside has a stunning aesthetic, as Limbo did, but pushes it farther with muted colours rather than black and white, except for the distinctly red blood, which reinforces the brutal stakes. There is more detail to the backgrounds which are also truly 3D. Whilst you run from left-to-right still, the camera shifts the plane all over the place to allow the action to progress in this 3D world without sacrificing the simplicity of moving left-to-right. 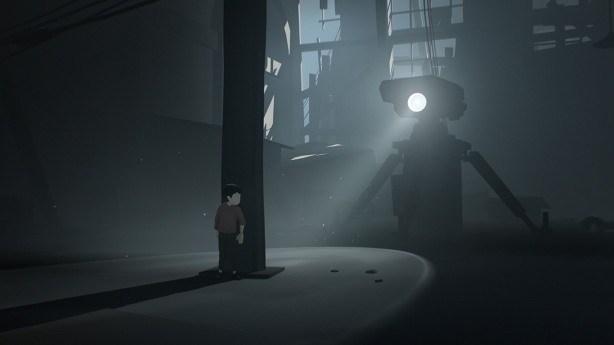 Limbo was the seed of a good idea that Inside fully realises. It has a mystery and an aesthetic that creates an oppressive mood, but it also crafts a full story within that with themes and ideas. The world of Inside has also has geographical and traversal logic threaded throughout. All of this taken together means that the abstract nature of the game is pushed further by having verisimilitude. Rather than just an artsy indie game, it is something you can truly live inside of (pun not intended). The mysteries of the text have multiple layers to reflect on beyond simply “solving” the surface level details. All that being said, it is also a very gorgeous looking artsy indie game and it functions very well as a platforming experience too. Managing to hold both of these attributes at once, without cheapening one or both, is truly a special achievement.

Played on Xbox One X

← Far Cry Primal
The fundamentals of storytelling and how ‘Doctor Who: The Tsuranga Conundrum’ fails to incorporate them →