This movie has to be an experiment. Its bizarre creative choices can only be explained that way. Director Michael Mann had already shaped crime and action cinema so much before 2009’s Public Enemies. This movie feels like he’s trying to push the envelope in small ways and use his new approaches in a later release. The most interesting things about Public Enemies are its use of film form: it is not an involving yarn or thematically rich piece.

The story, such as it is, follows cult crime figure John Dillinger during his last year on this Earth. He robs banks and sometimes gets caught, then he escapes prison and goes back to robbing banks. He’s presented as an adrenaline junkie. Whereas the folklore around Dillinger portrays him as a hero of the common man, Public Enemies presents him as a man who curries public favour just to make hiding out easier. He forms a relationship with Billie Frechette. The film portrays it as happening faster than that last sentence. They meet, they go on one date and he demands her loyalty and she obliges and instantly falls head over heels in love with him. Then the movie cuts forward further into their relationship and that’s all the development it really gets.

Meanwhile Bureau of Investigation Agent Melvin Purvis is hunting Dillinger. He’s introduced as being J. Edgar Hoover’s man in the field. Purvis is the future of the service. He represents the upcoming invention of the FBI and its widespread use of cutting edge crime fighting and forensics technologies. Except then the movie doesn’t really do anything with this. John Dillinger’s plot is something of a “last days of the West” story (but for old fashioned city gangsters) in its most basic form. Purvis’ plot is just playing lip service to the new world coming their way. Both Dillinger and Purvis are portrayed as enigmas. Dillinger is a man of pure focus and that’s where the movie’s interest ends. In real life Purvis eventually took his own life and it seems like the film wants to avoid dealing with the beginnings of that in his character, so he just seems sad, lonely and shut off.

Dillinger, Frechette and Purvis are played by Johnny Depp, Marion Cotillard and Christian Bale respectively. It seems likely these big names were cast to get bums in seats at the theatres and then the movie is really about Michael Mann playing with cinematic form. This movie has no interest in what makes its characters tick and it has no interest in its own love story. It doesn’t explore its own themes of a changing world. The movie doesn’t even have Purvis using the then cutting edge crime and forensics stuff it deliberately set up. He just keeps finding Dillinger with the barest of off-hand comments to justify it. And even for a movie with stripped down characterisation Billie is painfully underwritten, which makes the gratuitous torture she endures in the third act seem even bitterer. 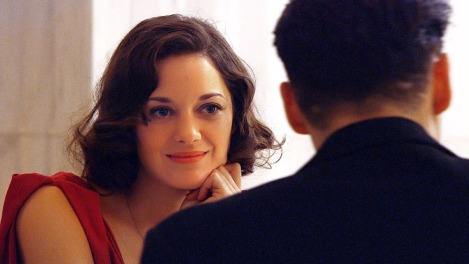 So what is the movie about? It’s about trying to find new ways to shoot grounded action scenes on digital film. Michael Mann already used cheap looking digital film in Collateral to try and create a sense of realism. It didn’t work there, however it does work here. At first the movie’s aesthetic is a little jarring. It has the visual quality of a mid-2000s BBC documentary. Half the time you can imagine Louis Theroux popping up to give Johnny Depp a Socratic grilling. Audiences are used to seeing the past depicted with sepia toned raw film grain. Instead Michael Mann shows us what this past world would look like with our own eyes. Traditionally cinema shows us a version of the past that only exists in imagination, here Mann gives us how it would have actually looked at the time as if we sent a modern documentary crew back in time.

That documentary feel also creates even more distance between us and the characters. Even though as an audience it is impossible to connect with them, it does make them feel real. This sense of reality real comes to life in the action sequences, which is the thrust of Mann’s vision here anyway.

We’re all used to watching well dressed gangsters with Tommy-guns shoot at cops. Except in Public Enemies it feels so much more visceral. It’s closer to news footage from warzones than classic Hollywood noir. You start to think about the damage a bullet can do, the innocents in the crossfire and the fact that the following medical responses will be less effective. This is a world before police had technological advantages over criminals. The criminals had the same types of guns and cars as them. You had to go toe-to-toe with crooks more experienced in combat than yourself. 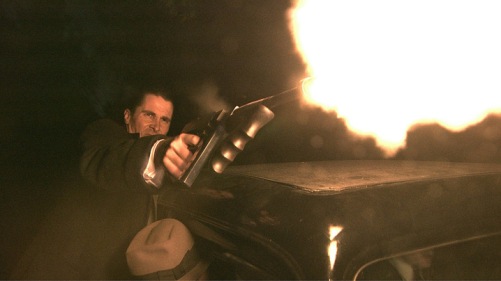 All that being said, there are a few slightly too obvious attempts to create a documentary feel. Some shots or edits remind you you’re watching a movie. None of the shoot outs ever match what Mann achieve in Heat. Although one does appreciate how frequently Mann drops an action sequence into Public Enemies.

One has to also respect Mann’s aims here. Action movies are often at their best when they strip themselves down to the core and focus on thrilling the audience and playing about with shots and editing. The Raid is a master class in that approach. That movie even has a few over stylised shots that throw you out of the story. However The Raid is very well paced and has solid storytelling.

The third act of Public Enemies has Dillinger resting up. He’s escaped the life and he’s relaxing into civilian routines. However we’re shown that someone inside his inner circle has betrayed him to Melvin Purvis. This act is drawn out and not much is happening. We know Dillinger doesn’t know what’s coming and he doesn’t stand a chance. There’s no tension in the inevitable. This act does do some fun stuff in showing Dillinger in more average circumstances: going about town, hanging out in kitchens making small talk and so on.

It feels like this vertical slice-of-life stuff should have been the first act of the movie. Then the movie should have perhaps ramped up the pace. We shouldn’t see his death coming even though it is a famous historical event. Think about the death of Leonardo DiCaprio’s character in The Departed. It comes out of nowhere and it feels sickening. Executing a similar sequence in Public Enemies then revealing the betrayal from Dillinger’s circle after his sudden death would be shocking, especially after seeing him and that character act like ordinary people together.

Overall Public Enemies is a gratuitous experiment in film form that doesn’t pay off, but it is still a very interesting and sometimes visceral watch. A long watch though…