This week on the Arrowverse: Introduction (VIDEO)

This video is to serve as an introduction to a new weekly video series I’ll be doing starting tomorrow. Basically I’ll be releasing weekly reviews of the shows from the Arrowverse, or Arrowmultiverse technically. So I’ll be talking about Supergirl, Flash, Legends of Tomorrow and Arrow of course. Eventually I will cover Black Lightning as they’ve said it may cross over with the others. They said the same thing about Supergirl and it definitely did cross over with Flash even before it moved channel.

Because I don’t want to be twatted by copyright claims every week the backdrop to my videos will be my terrible playing of Injustice 2, because it’s great and I can’t stop playing its Multiverse mode. I haven’t even completed the story yet. But I love my iteration of Black Canary and I love Black Canary herself so damn much. Plus, a game about the DC multiverse is an appropriate and interesting visual backdrop for discussion of a certain corner of the DC multiverse.

So I guess in this intro video I should give a few opinions on the various shows. I’ve rewatched the last seasons of each respective show in prep for this video. ANYWAY.

Obviously the channel change affected this show. There were some basic budget and casting changes. The home base for the DEO got more logically centralised in the city, but looks less cool and less cavey. The loss of Cat Grant was hard to suffer.

But the introduction of Maggie Sawyer, Mon-El and Snapper Carr was much more than enough to make up for her absence.

Maggie Sawyer was a cool interpretation of the classic cop character from the comics and she also helped push Alex Danver’s story forward. Alex Danvers generally got a lot of fun stuff to do last season. Including more than a few action-heavy lone spy capers. Big love for the spy capers.

Snapper Carr was fun as a voice for traditional reporting values. He believed in proper journalistic standards, whilst also being a slight stick in the mud for moral progressivism. Frankly, Kara needed someone like him to bring her own morality into focus.

And I love, love, love Mon-El. He’s obviously got an awful past and is complicit in some dodgy shit. But that gives him a nice redemption arc. Also, look at his lovely face. And I admire a man who makes sure to take three slices of pizza whilst storming out of an awkward dinner party.

Overall the season was a bit messy as it went along, but it really pulled all the threads together for the two part finale. And that Supergirl v Silver Kryptonited Superman battle was awesome.

Iris also never really got to be an active participant in a story about her own inevitable death… And it’s odd that Killer Frost being evil is built into her powers, rather than an aspect of Caitlin’s personality. It made that whole plotline tedious that there was no connection between Frost’s actions and the emotions of the character we know. The whole thing had insidious undertones of a female character having no agency because of her body. Not good optics guys.

What a step up this was. It turns out the only thing stopping this show being good was the Hawk couple. Now they’re gone the fun can begin.

It’s a shame that Rip Hunter was busy elsewhere due to actor reasons. But it gave Sara Lance a chance to step up into the leadership role. I actually used to dislike Sara Lance on Arrow. But she’s great on Legends of Tomorrow. She gets to be stern and leadershippy, but also carefree and reckless. Caity Lotz is also obviously a natural at stunt fighting. She’s probably the best actor for fight scenes in the whole Arrowverse.

We also got new Legends in the shape of Nate and Amaya, or Citizen Steel and Vixen. Amaya was a nice addition to the team as a professional, someone who worked with the Justice Society. Someone who knows how to fight without powers, with powers and how to work undercover. She also has a unique perspective as a person of colour from a time period with even deeper entrenched racism than our own times.

Nate was often spoken about as being a bit too like Ray. I found this to be false. They had surface similarities in attitude and jokes. But they had very different goals and Nate is more serious and pragmatic than Ray, if a little less self-effacing.

Legends of Tomorrow is the wild fun ride of the Arrowverse. It doesn’t care about always being logical or dramatically deep, it likes to revel in absurdity and camp. So season 2 made the best decision ever on that front by having the world’s campiest and hammiest Legion of Doom by bringing in Eobard Thawne, Captain Cold, Malcolm Merlyn and ham king himself: Damien Darkh.

Also it was nice the show called out Mick’s constant side changing but also the team’s lack of recognition of his personal growth.

Many people had given up on Arrow after season 4. But I didn’t hate season 4 and thus I kept watching the show in season 5, for a simple reason: Because I wanted to and I liked it.

The action was more brutal. Oliver’s choices when to kill or not to kill had weight. Stephen Amell found new depths to Oliver Queen and not all of them were happy. We found out he really was a serial killer in season 1, not just a misguided anti-hero.

Prometheus was the most terrifying and creepy villain the show has ever managed. His avenging crusade against Oliver was even more visceral than Slade Wilson’s.

Oliver Queen as mayor worked very well and found a great way to connect his civilian life to his life as Green Arrow. Even if it meant we had to cope with a clunky gun control episode.

Quentin Lance as deputy Mayor was a master stroke and the show even found a way to thread Thea into the mayor’s office and Quentin’s personal life. We saw the same narrative trick later in the season with Rene Ramirez.

Which brings us to the new recruits. Rene was annoying at first, but I really felt a lot of admiration for him by the end of the season. Dinah Drake is written with a clearer understanding of the Black Canary comic character, that Laurel never got. Mister Terrific’s T-spheres are cool. Rag Man had great presence before he left too early. Evelyn Sharpe and her eventual actions were a nice continuation of a few good threads from season 4. The new team also gave Diggle some new opportunities to be everyone’s best friend. Although I felt his conspiracy plotline was a little tedious, but it was nice to have it finally tie off years of plots about Andy Diggle.

Even Felicity got a plot that has served her character growth. She’s become more and more morally compromised as this show has gone on, whilst everyone else has achieved moral growth. So having her throw all decency out to work with an overzealous hacker collective was fun.

I can’t wait to binge through the new stuff today before catching up with Arrow tonight. I’ll see you tomorrow for This Week on the Arrowverse. 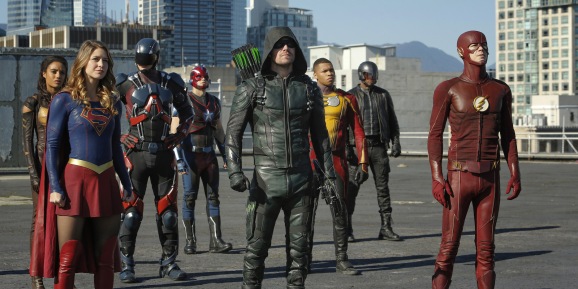 ← The Dreaded Backlog: Call of Duty: Infinite Warfare
Dana Scully deserves to be right: The flaw at the heart of The X-Files →