Over the last few days I’ve seen a few negative reactions by Star Trek fans to the first three episodes of Discovery. I’ve liked my experience of the show so far and it’s getting mostly positivity from critics. So why is there significant disquiet from some elements of the wider Trek fan base?

It’s been a long time since we’re had proper Star Trek. If we’re being honest, it’s always better on the TV than in the cinema. It just fits the medium better. So even if you love the recent Star Trek movies you’ve probably still missed the franchise being on TV. That being said, the movies have been disappointing. When they’ve been good like Beyond they’ve made no money. There are rumours the next movie will feature the return of Chris Hemsworth as Captain Kirk’s dad. That just doesn’t seem like a very good fit for a Star Trek story. It feels like we’ll be returning to the continuity-porn yet point-missing days of Into Darkness.

So there’s a lot of pressure when Star Trek returns to the small screen. It has to both live up to long term expectations and defy the recent cinematic lows. A poor first step is to only release the programme on your channel’s overpriced bespoke streaming service. That’s cutting viewship way down whilst pissing everyone off. Thankfully for me, it’s on Netflix in the UK.

Then there’s the rumours of creative problems. The programme is envisioned as an anthology and then it isn’t one anymore. Then the executive producer quits. Then it’s delayed and delayed again. People are now expecting it to be shit. The show Star Trek: Enterprise is divisive, I think it has moments that reach heights Voyager never even dreamt of, but other people hate it, thus why it is divisive. So then to say Discovery will be another prequel will dredge up memories of divisiveness at the outset.

Then Discovery arrived and there are no major concerns. Michael Burnham is a great lead character, she has strengths and flaws and well realised contradictions in her beliefs. The effects are incredible for television. Continuity is being respected so far. The casting is better than it’s ever been on the TV side. And the time period the show is set in is justified by the plot and the tone.

And the choice of plot and tone is where we might find the annoyance towards the show from the fan base. Discovery is dark, violent and morally murky. The characters are conflicted, sometimes unprofessional and often morally compromised. Now I feel fans who don’t like this tone are likely thinking back to the heyday of Next Gen, Voyager and early Deep Space Nine. Wherein the Federation and Starfleet was full of gentle and polite intellectuals. They only had to be violent in self defence and still went out of their way to avoid violence even then.

I feel these fan’s annoyances. I do want old Star Trek back. I miss those days too. But if Star Trek is at least partly about going where no one has gone before, this new show has to do new things. TV has changed to be more arc heavy, so they’re trying to put a Trek spin on that. The world is arguably darker than in the bulk of Treks run in the ‘90s, thus they want to reflect that. Deep Space Nine had explored war and a compromised Starfleet in its last few seasons. But Discovery clearly wants to push that further.

It wants to see how The Federation can be compromised whilst it’s young. It wants to take the Klingon lore and turn it into a parable about ISIS and Trump rolled into one entity. It wants to put a hero that’s lost and confused in the middle of that. I think introducing a darker tone is unique and helps new viewers get acquainted. Star Trek is about space explorers, trained in philosophy and science, who belong to a socialist utopian society. You have to warm people up to that idea. And to make that idea worthwhile you have to challenge it. Arguably Voyager is the weakest Trek show because it just regurgitates safe Next Gen tropes in spite of a premise clearly initially designed to create constant conflict and doubt. I have faith that Discovery will be about the characters realising the error of their ways and reconnecting with the idealism of Federation values. Discovery is quite clearly condemning cynical actions viewpoints on display in the show.

At one point Trek was just a three season show with a handful of movies. Then Next Gen came out and was the new thing that didn’t fit what came before. But it has become the touchstone for the franchise as well as the most influential genre show ever made.

And do you remember how bad Next Gen was when it started? It was fucking dreadful. The first three seasons of Voyager were barely watchable. DS9 had a solid first season, but it didn’t find its identity until the end of that first season. So far Discovery has a focused story, consistent themes and interested and well thought out characters, who are all perfectly cast. You may not like what Discovery is doing at the moment, but it is well put together. So give it the time you gave those other Trek shows.

My favourite thing about Discovery is that its time period allows a little more injection of the spirit of the original series. The crews have rougher interpersonal relationships and that’s interesting. The Captains are more individual in their decision making processes, which makes a perspective from a lower ranked officer more compelling. And the original series had action and danger. As Captain Janeway notes in the episode ‘Flashback’ from Voyager, Starfleet pulled their phasers faster in those days. And that can be fun, it especially helps with an adventure tone. The calm and collected vision of Starfleet depicted in Next Gen is important to have. It shows us a hopeful vision. But let that be Next Gen’s thing. Maintaining that tone did no favours for Voyager.

Instead it is time for a show that takes the darkness and thoughtfulness of Deep Space Nine and combines with the action-orientated high-adventure of the Original Series and then pushes them both farther. Next Gen showed us what we can be, maybe Discovery can show us how to get there from a place of darkness and cynicism. Perhaps that’s why there is the odd title of ‘Discovery’ in a show about war, rather than new worlds, because its’ about discovering who we should and can be. 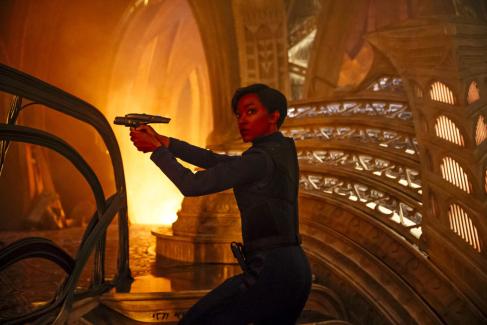