Superhero movies are all over the place these days, obviously. The 1978 Superman movie is an inspiration for many of them. Its earnestness is a clear inspiration on modern greats like Sam Raimi’s Spider-Man trilogy and even this year’s Wonder Woman. All that being said, viewed on its own merits Superman is kinda shitty.

When people talk about this movie they often talk about it as the definitive depiction of Superman. He’s hopeful, heroic and avoids violence. There’s romance and humour too. Tonally this film is essentially where it should be. However the storytelling is a mess. I was amused to find a lot of the things that people cite this film as doing better than Man of Steel aren’t true. I apologise for breaking ‘good’ film review convention by comparing the two movies in the following manner, but it’s helpful to illustrate a few points.

For starters this movie spends literally twenty minutes on Krypton at the beginning just like Man of Steel. Hell, he doesn’t even go to Metropolis until fifty minutes into the movie. This film is often remembered for the workplace banter and romance between Superman/Clark and Lois Lane. Except that all happens in a small twenty minute section of the film in the back half.

Superman has a lot more of what I will call Man of Steel-isms too. All of Clark’s origin sequence(s) are just an exposition dumps followed by a growth in his abilities. There’s no storytelling within these sequences, no conflict or ebbs and flows of character beats, just “here is why Clark is Superman” for an hour. All of this is dragged out by inspirational music and fatherly monologues. The grandiose speeches by Jor-el and Jonathan Kent that people hated in Man of Steel are present here too.  The “you’ll be a God to them” speech in Man of Steel is practically taken verbatim from this movie.

I used to say Man of Steel would have been a more emotionally involving movie if they played his origin in order, rather than as flashbacks spread throughout the film. I was wrong, this movie showed me that. Holy fuck did this need to begin in medias res with Clark joining The Daily Planet. Even Tim Burton’s hilariously overrated Batman realised that the way into the story is having a journalist uncover the superhero. This is a better hook for a narrative, both emotionally and structurally.

Sure, this movie has colour and flair to it. It doesn’t have Man of Steel’s inappropriately apocalyptic ending. It even has Clark “fail” by not preventing Lois Lane’s death, as opposed to his failure in Man of Steel, where he is forced to neck snap Zod. Superman does this better because he overcomes his failure by turning back time. He is an inspirational superhero who uses his powers to rise above human failings and so on. Although it is worth pointing out that the internet has squeezed a lot of plot holes out of this ending over the years, let alone the silly manner even relative to this movie in which Superman turns back time. Instead I’ll point out that Superman only gets saved from drowning in Lex Luthor’s trap because Luthor’s overall plan would kill Luthor’s girlfriend’s mum, so the girlfriend saves Superman. That’s a protagonist earning nothing. 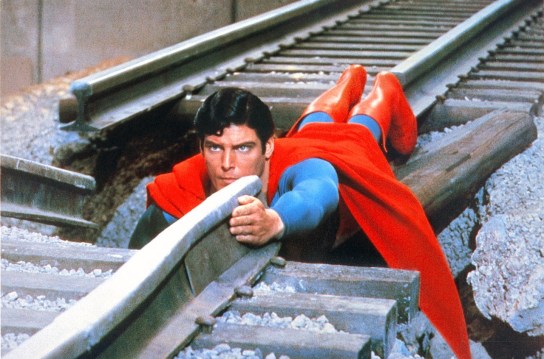 I know in a review one shouldn’t compare a film to expectations, retroactive or otherwise. However, once you remove the nostalgia goggles all that is left of Superman is a narrative and emotional void. There is very little to this movie. There’s only one romantic sequence between Lois and Clark to base all their love on. There’s only one montage of Superman saving people. Clark never does any journalism. All of this happens in the second half of the film. The first half is laborious overwrought set up. When people say this film is inspiring do they just mean John William’s theme song?

I say ‘theme’ because John William’s actual score here is his usual fare. It is the same in nearly every movie. He’s great at themes. And out of all the themes he’s done this is…one of them. Speaking of John William’s themes, Star Wars was released the year before this. Now I realise most of Superman was already in the can before Star Wars was released, but they still should have adjusted the effects work in this movie accordingly.

Star Wars had a fraction of Superman’s budget and stands the test of time significantly better. Obviously Superman is a product of its time and to judge it harshly for aged effects would be cruel. I am just saying that I can point to a movie released the year before that did it better, with a lot less money to do it with.

Superman has its place in film history and it earned its place. It is an excellent reference point to establish tone in new superhero movies. However, it is also the first superhero movie. And if we’re being honest, aside from Spider-Man, Spider-Man 2, X-Men 2 and Hellboy, all superhero movies were shit until about 2008. Superman does come to life in every scene that lets Christopher Reeve do his thing, either as Clark or Superman, but it’s all too late and in tiny doses. Superman does actually manage to squeeze in a negative trope from modern superhero films: the narratively unjustified sequel hook. The first ten minutes of Superman exist to set up the Zod plot in Superman II and are irrelevant to the rest of Superman. So Superman is ahead of its time in the wrong ways too…

On a final note: Lots of fans of Superman hate the hammy and motivation-free Lex Luthor played by Jesse Eisenberg in Batman V Superman: Dawn of Justice, so why on Earth does Gene Hackman’s Lex Luthor get a pass, or praise, in Superman? Sure, Superman is a cheese-fest, but Hackman goes way beyond that with even less motivation.

TAKE OFF YOUR NOSTALGIA GOGGLES SHEEPLE.