The Dreaded Backlog: Injustice: Gods Among Us

I’m not good at fighting games. I can do the button bashing Tekken thing, I just feel dirty doing it. I enjoyed the slightly more complex Dead or Alive games, but they have all the maturity of a thirteen year old’s wank fantasy. I am admittedly limited in my experience of the Mortal Kombat series. That is unfortunate as the same team is behind Injustice: Gods Among Us.

This is one of those games that one appreciates without it being for oneself, unless it is for you and then you’ll be in heaven. The game’s systems are clearly very well designed. It discourages button bashing and encourages learning the nuances of every character and level. It requires skill and tactical awareness. The fights are quick and brutal, but still require some patience as to not overplay your hand. However, this game is still not for me. It is simply beyond my capability to master and enjoy in the long term, but I still think very highly of it. I even like watching pro-gaming matches of Injustice. This game doesn’t need the DC license to be good as it is a solid and nuanced experience on its own terms. 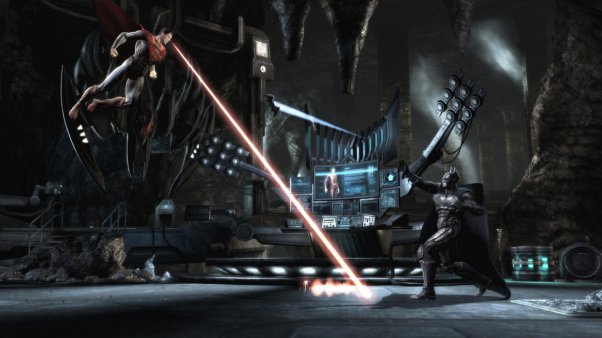 All that being said I also love DC. This is a good game about DC characters. Even a cursory glance at this website betrays that fact I love DC. My love of DC is why I played this game. The campaign is inventive. The plot is simple but homages many great DC multi-verse stories. This plot also allows for the player to take control of various DC characters and then threads their disparate battles into a whole. It’s not just a fighting game with stage-by-stage challenges at a fight tournament or any of that bollocks. The game does also include a single player mode that allows the player to select their favourite character and do a stage-by-stage fight campaign. There is also the STAR Labs campaign which comprises various challenges. There is a lot to enjoy beyond the campaign that I just originally turned up for. Injustice: Gods Among Us reinvents the wheel for fighting game campaigns, whilst still putting in traditional modes for those that want them.

There is an Injustice 2 to be released later this year. I enjoyed this title enough to know I will buy that too. In fact, if it wasn’t for Injustice 2 coming out I would probably pour a lot more time into this game. I’d like to complete all the modes and actually master some characters if I could. I’d probably fail, but I’d still enjoy the process. When I am beaten it will feel like I’ve been genuinely bested by a good game. However I now wish to do all that with the second title instead. Especially as you can play as Black Canary. In fact I only wanted to play this game so I could play Injustice 2, which I was originally only interested in for playing as Black Canary.

However, there are lots of other characters to love in Injustice 2 and ultimately the title I am meant to be discussing. There is clearly a lot of love of DC lore going into the character design of Injustice: Gods Among Us. They hired Kevin Conroy to voice Batman as anyone sane does. The costume designs are all a balance of comic book design, with semi-realist aesthetics, but paying some attention to being a bit cartoony as well. This doesn’t always work amazingly as some designs are just bland, such as with Ares. However it matches the tone and aesthetic of the world this adaptation has created, albeit with some graphics being a bit rough for the time of release, let alone now.

It’s a good game, I liked it and I may have to read the critically acclaimed tie-in comic.

← What Netflix can learn from The Crown
The Dreaded Backlog: Doom (2016) →