Westerns. One of the most enduring and mythic genres that the world has ever seen. But what makes them so popular? Is it their ability to pit man against wild? To tell stories of how civilization overcame the wild, untamed frontier? Or is it all those lovely, lovely the hats?

On this trip I will be journeying through the history of Westerns, and sharing my thoughts on them as a relative newcomer to the genre, so sit back, relax, and chew on some tobacco. This is Richard’s Western Odyssey. Enjoy!

Let’s address the elephant in the room: it’s been a long while since I’ve written one of these, almost three months! If my maths is correct then three months is a quarter of a year. That’s far too long, but sadly University work and other life things got in the way, but since I’ve finished all my assignments (for now), I can focus on what I love most: writing about westerns in a way that makes it seem I know what I’m talking about whilst at the same time not making that many interesting points.

First is 1960’s ‘The Magnificent Seven’. The basic plot is ‘a village in Mexico hires a group of gunslingers to protect them from a viscous gang’, and boasts an all star (for the time) cast, including Yul Brynner, Steve McQueen, Robert Vaughn, and James Coburn.

“Hey guys, how about we don’t stand grouped together when we’re in a gunfight?”

As with many of the films that I have talked/will be talking about in this series, I was aware of the apparent significance of this movie. I had always heard it mentioned in the same breath as other classics like The Searchers, Once Upon a Time in the West and The Dollars Trilogy. It surely must be one of the great westerns, yes?

So you can imagine my disappointment when I found it to be wholly average and, more than anything else, a little boring. I’d argue that the main reason for me being so underwhelmed by it was its reliance on its star power. Now, if I were alive in 1960, driving around on a moped whilst sporting impressively and expertly quaffed hair (as I have reliably been informed the 60’s was like), I would no doubt be impressed with this cast. Sadly however, the year is 2017, I can’t ride a moped, my hair is less “quaffed” and more “completely and totally fucked”, and however impressive this cast may have been, their star power doesn’t really do anything (for me at least), and as such doesn’t serve as much of a distraction from a film that, although meets all the general criteria of a Western, ends up as fairly bland. Once again, this is a symptom of having so many stars on board: with them and their characters all jostling for screen time, the film can feel stifled.

It’s a film that relies on its cast, but in an age when that cast’s star power isn’t all that powerful it seems to have forgotten that it needs to give us interesting characters. 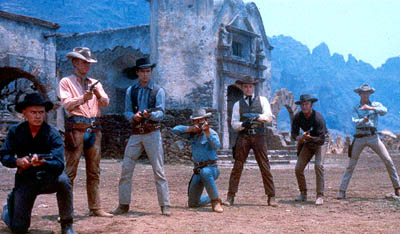 “I AM SERIOUS GUYS YOU NEED TO GO FIND YOUR OWN DAMNED SPOT!”

If it’d cut some of these characters it would’ve benefited the film massively. And yes, I know it’s based on Akira Kurosawa’s 1954 epic Seven Samurai, but that film had a run time of three hours and thirty seven minutes aka the amount of time it takes me to finish a 12 piece bucket from KFC (sans sides), so I assume that film makes use of its lengthy runtime to make the characters memorable.

So overall, yeah, it was fine I guess. It looked like a Western and some of the gunfights were cool, I just didn’t find the characters all that engaging.

Which certainly cannot be said for The Man Who Shot Liberty Valance (that is what’s known as a “perfect segway”).

Where to start with this? This film has both Jimmy Stewart and John Wayne, who was certainly known as “the John Wayne of his day”. So far Jimmy Stewart has fared well in the films I’ve watched for these articles, Winchester ’73 and How the West Was Won. He brought a tough earnestness to those roles that I always imagined a western protagonist to have. On the other hand, John Wayne’s films (besides the almost untouchable The Searchers) haven’t really impressed, nor have his characters in them. They’ve mostly been fairly bland Western hero archetypes, with little too them besides “a hat” and “that red jacket that John Wayne insists on wearing, no matter what the costume designer suggests”. Nonetheless, I was excited to see these two cinematic icons opposite each other on screen. 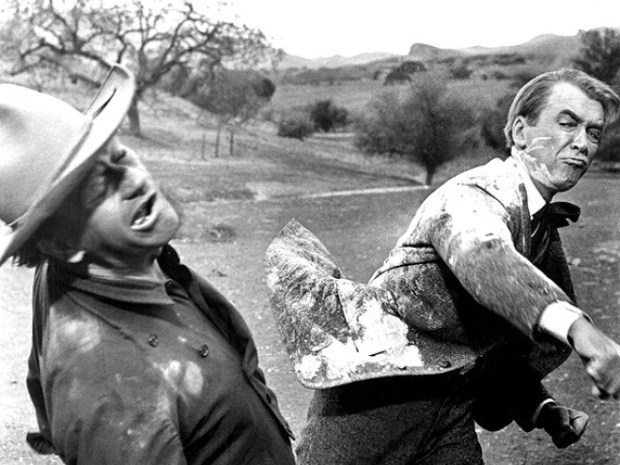 Mainly because of this.

And you know what? It’s really good. Really bloody good. Great, even. Jimmy Stewart plays young, idealistic lawyer Ransom Stoddard, who arrives in the frontier town of Shinbone (just up the road from Fibula no doubt hehehehe), only to be robbed by the titular Liberty Valance. Soon he’s rescued by John Wayne’s Tom Doniphon, a rough, tough and gruff cowboy. Stoddard wants to capture Valance and have him face his crimes in a court of law, but Doniphon insists that force is the only thing that Valance will listen to.

Now as set ups go, that’s a pretty intriguing one.

I mean, on a surface level (which is my favorite level and the one I exclusively operate on), they are embodiments of two very different lifestyles at the time. The film never states what year it takes place in, nor which state, but it appears to be late 1800’s/early 1900’s, judging by the story it tell, and that’s the story of “the old way of life being replaced by a new way of life”. Doniphon represents the old way of life, where the only way someone got what they deserved was by getting a bullet in the back, whereas Stoddard is the new way of life, the highfalutin city boy, arriving in town with all his ideas based around “law” and “just judicial process”. Seeing these two go at it, whilst still being on the same side, is extremely enjoyable. The two of them debating back and forth about which way is right is fascinating, even more so when you consider the actors play them: John Wayne is perfectly cast in this (as he was in The Searchers) as a symbol of the old, classic way of life in the west, what with his history in the genre. His character, whilst archetypal, is perfectly utilized in this respect.

Jimmy Stewart also brings a sense of not so much naivety to the part, but a wide eyed inexperience, almost nervousness, but sticks to his guns throughout the majority of the film, constantly repeating and arguing that his way of law and order is the right way. Or at least, he does that until he sees no other option than raising a gun against Liberty Valance. It’s a moment in the film that’s heavy with dread and tension. When Valance is shot, it feels odd at first, almost going against both the character and the message of the film. However, the reveal that it was actually Doniphon who shot Valance from afar, drives the point home: there is no such thing as an absolute truth. Both men are right, but they’re both a little wrong as well. 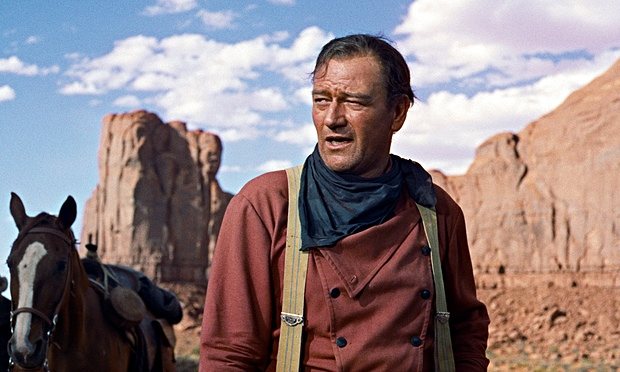 LOOK AT IT FFS! IS THIS THE ONLY JACKET HE OWNS!?! CAN SOMEONE NOT BUY HIM A NICE WINTER COAT OR SOMETHING!?!?

And that’s it for The Magnificent Seven and The Man Who Shot Liberty Valance. The former was disappointing, the latter is one of the best westerns I’ve watched so far. This series is nothing if not eclectic.

Come back next time when I’ll be watching Ride the High Country and The Ballad of Cable Hogue. I’ll try not to leave it three months this time…

← Where are the good Halo characters?
The Dreaded Backlog: The Last Of Us →