I have had a series of mixed experiences with the Mad Max film series. I found the original to have insane plot beats and generally lack any of the features its reputation suggests. There was a lack of car-on-car carnage and wasteland violence. There’s also a weird bit when Max and his family go on holiday unarmed. I had a better experience with The Road Warrior, but still found its final sequence to be somewhat lethargic. Beyond Thunderdome is gloriously fun in both halves of its runtime, problem is both halves are essentially entirely different films. As for Fury Road, well that’s a masterpiece and we all know it. However over time my appreciation for the previous titles grew. They still don’t match Fury Road in my mind, but there is appreciation growth all the same. I adore the almost-Western depiction of the Australian post-apocalyptic wasteland. The deserts hewn in harsh unyielding sunlight. The peak of technology being rusty cars and sawn off shotguns. The way that everyone has turned insane and developed quirky derivatives of the English language (I ducked an easy shot about real life Australians here). In these regards the 2015 video game Mad Max is absolutely perfect.

WB Games have created a desert world of both serene and chaotic beauty. The desert vistas are stunning. The atmosphere is thick and infectious. You get into so many situations that feel iconic. Situations like a desperate grapple for survival with a thug on the dunes in the moonlight. Running from sniper fire in the hot midday sun. Besieging a fortress as the sun goes down whilst your gun is stuck in mud. The moment I feel in love with the game was early in when I was desperately trying to get to cover in my flaming car in the middle of lightning storm. In addition to a complex series of day/night system, there are various forms of storms too. Like most open world games there are different ‘areas’ with different looks. If you think that Mad Max would have dull variations due to it being entirely desert based, you couldn’t be more wrong. There are five main zones and each one seems to derive from a visual aesthetic from each of the four films. One area has the tarmac and remaining buildings of the original film whilst another is more akin to the juicier looking desertscapes of Fury Road. The fifth and last area is a land of pure scrap and human waste. It’s somewhere between a bin man’s nightmare and a Scrapheap Challenge contestant’s wet dream.

But is the gameplay filling this world as good as said world? That answer is less than simple. There is a basic combat model that feels like a mixture of the freeflow combat of the Batman Arkham series and a more traditional button bashing fare. This creates a simple method of fighting that also feels brutal rather than inappropriately graceful like Batman. Max is a thug that brawls. If you have a spare bullet you can let off a shot, but it’s better to save that for bigger targets. Punching people is incredibly satisfying. The animations, controller vibrations and sound effects for punching are all working perfectly in tandem to make the simplest act of violence enjoyable over and over. There are three main enemy types for close combat. Normal punchy dudes, flippey dudes and big dudes that run at you. If this sounds limited you’re right, but there is a logic to his. There are no dojos in the wasteland. The people in charge got there by being big enough to beat up anyone, so they’re huge chargey dudes. The average Joes are fight like average Joes. And the people that have been turned insane literally leap at you.

The driving is solid, if a little unwieldy at first. The car camera is fucking dreadful. It doesn’t allow you to adjust it and it adjusts itself in the middle of chases when you need to be facing front. Your car eventually gets short range rockets, a grapple hook, side burners, a sniper rifle and Max’s shotgun. You can also ram and bash and shoot Max’s shotgun at fuel tanks. This is all fun and very much a ‘play it your way’ experience’. Your car is entirely customisable for the various ‘Death Runs’ or ‘races’ as you’ll call them. Another of the biggest game play functions is the lack of regenerating health. You heal through water and food. Both are scarce. In fact you’ll spend much of the early game losing health trying to get health back.

As you may have heard Mad Max is very repetitive. I have described the majority of the game’s features already. You may have seen, read of heard opinions complaining about that fact. Those opinions have missed the point. Mad Max is about a world populated by sand, run-down cars, desperate violence and not much else. The lack of variation is the point. It’s a repetitive life out there in the wasteland. Whilst that could read as a game breaking flaw, it’s not. You just have to approach the game with the right attitude of appreciating the atmosphere and the direct and brutal violence of the game. Even the health mechanic may seem dumb, how does food instantly heal cuts and bruises? The thing is that it doesn’t. Max’s character model is still riddled with open cuts, sometimes an hour after you’ve been in a fight. To my mind the health represents the will to continue fighting, to keep going, a mixture of physical and mental energy. It’s not about healing the wounds, but staying alive with the wounds. I can’t think of any better sentence to summarise Max’s mentality. 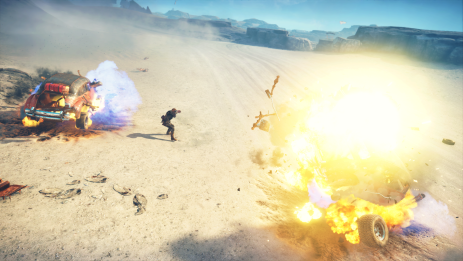 Speaking of Max, what is his journey this time? In the broad strokes it is business as usual. Max doesn’t want to get involved in anything, but must learn to help others in spite of himself. In the opening of the narrative Max’s iconic Interceptor is stolen. Max is then left for dead. He then bumps into ‘Chumbucket’, a deformed mechanic who worships cars and expert drivers. He calls Max ‘Saint’ and wants to build the ultimate car, his ‘Magnum Opus’. That’s the plot, Max and some guy he bumps into want to build a really good car. Eventually this leads Max into more personal encounters, but the desire to build a good car is the main ‘point’. This unifies the gameplay objectives with story objectives and provides a motivation that is quintessentially Mad Max. In the films Max goes around doing nothing really except refuelling his car and his body, until his empathy gets the better of him on rare occasion. His life is fleeting glimpses of humanity in a desert filled with few people and that is how the game plays too. The already rich atmosphere is richer for it. The fleeting glimpses of humanity take the form of brief dialogue interactions, harsh flashbacks and hallucinations and finding old books and photos belonging to the long dead. Chumbucket is a good laugh too.

Eventually I found myself settling into a relaxed mind state. I let the wasteland take me. I enjoyed the day-to-night scavenging, brawling and driving rhythm. I enjoyed the laborious slog through side missions that made the story missions easier. I’ve now completed the story campaign, all side missions and all the death runs. I have every option for my car unlocked and for Max himself. I am still playing. I simply love exploring this world. There is a joy in the way that every camp is laid out for different personalities. There is more joy in finding old houses and churches hidden in the sand. There are also many dark caves full of members of Buzzard clans. In these moments Mad Max often straddles the line of horror fiction. I’m still playing this game without tasks because it’s that great just being there.

If you aren’t a fan of the films, or at least the world of the films, this game is not for you. If you don’t find fun in needless exploration or excessive levels grinding, this is not for you. If you like it when a punch in a film, TV show or game feels good, this game is for you. I’ve often held a view that the Mad Max films aren’t to be taken literally. They’re intended to be ‘myths of the wasteland’, which allows for Max to be played by different actors and to have continuity errors. Mad Max the game is set in the world of all four films and none of them. This is your Max Rockatansky myth and just another part of his legend.

P.S: If you’re still not convinced, you should know that you get a pet dog too.