Is Wrestling A Great Form of Storytelling? The Four Horsewomen

This is the second part of the a three part article. The first part can be found here. The third part will be posted after the weekend.

Previously I questioned if professional wrestling can be a medium for great storytelling a la that which you can find on prestige TV dramas. As an example, I laid out the context for a very recent storyline set in the arena of women’s wrestling. Specifically, women’s wrestling on WWE’s show, NXT. NXT is like the academy for WWE. Where up and coming stars can hone their talents as well as develop their characters which they were likely to carry with them for the rest of their WWE careers.

Development is the number one goal of NXT. The idea for wrestlers (and the writers behind the show) is to find for themselves a character that “gets over” (becomes popular) with the fans. NXT’s fans are a small but very vocal group of people. Unlike on the main WWE shows, NXT does not tour the country. Every week is filmed in front of the same fans in Orlando, Florida and as such they have become as much a part of the NXT show as the wrestlers themselves.

One such wrestler from NXT who I described previously was Paige. A Norwich native who had a gimmick that revolved around being “The Anti-Diva”. Somebody who bucked the prototype female wrestlers on the main shows who were known for being buxom figured and could barely wrestle an entertaining match. In fact, most matches usually devolved into cat fights.

Paige was a hit with the Orlando fans at NXT and eventually she was promoted to the main shows where she continued her Anti-Diva gimmick to more success. However she was still in the minority on WWE’s main shows. Luckily there were four women’s wrestlers who were gaining popularity on NXT and would fill the gap left by Paige.

This is where the story truly begins. Four women who all had or were developing their unique characters on NXT. This was a sharp contrast from WWE’s main roster women who were mostly describable through their looks rather than any character traits. These four women were:

Charlotte: Charlotte is tall, athletic and good looking. She is pretty much the perfect shape for a women’s wrestler. Not only that, but she comes from a wrestling family, most notably her father. Her father is Ric Flair who is regarded by some as the greatest wrestler of all time. However the problem with that is that Charlotte is possibly destined to always be in the shadow of her more famous father. Plus there is always going to be the accusations of nepotism hanging over Charlotte. Charlotte needs to become a success in her own right and prove that she is more than just the daughter of a famous wrestler. That’s a great story.

Charlotte…and her dad. Even when she wins championships, he’s there!

Sasha Banks: Sasha was a little girl watching wrestling but she was unhappy with the state of women’s wrestling that I have described in these two articles. She wanted to come to WWE and put on genuinely great athletic matches. Upon starting in NXT, she was a wide eyed, wet behind the ears wrestler who learned that in order to succeed in WWE, you need to have a mean streak about you. Therefore Sasha adopted the character of “The Boss”. A woman who saw what she wanted and took it. She didn’t care who she had to step on to do that. That attitude paid off when she eventually won the NXT women’s championship from Charlotte. But in taking on this new attitude, she has lost some of her innocence and forgotten who she was when she was a small girl watching wrestling. That’s a good story.

Sasha Banks AKA “The Boss”

Bayley: Bayley and Sasha Banks have a similar path to WWE. Like Sasha, Bayley grew up watching women’s wrestling and knew it was what she wanted to do with her life. She even wrote an essay about it when she was in high school where she described how it wasn’t just something that she wanted to do, but it was something that she NEEDED to do. Also like Sasha, Bayley came to NXT as an innocent, green wrestler but unlike Sasha, she never took on a mean streak. She kept her child like attitude and it’s INCREDIBLY popular with the fans. But that success with the fans has never translated to in ring success. On multiple occasions, she has come close to winning the Women’s Championship but never has she been able to reach that extra inch to achieve her dream. That’s a great story.

Becky Lynch: Becky is from Ireland, a thousand miles away from the world of WWE. Becky was close to living a life of alcohol and marijuana until she started training at a small wrestling school.She started when she was fifteen and gradually rose through the ranks of wrestling while starring in promotions set across Europe, Japan, North America until finally she was called up to attend NXT. Wrestling has given her a new lease on life but in NXT she is still a bit of an outsider. It’s no secret that wrestlers from outside of America rarely find great success but Becky Lynch is determined to be the outlier. That’s a pretty good story.

These four women all had great characters plus they could wrestle a Hell of a match. Gone were the catfights and their place were technical masterclasses in both in ring action and psychology.

These four play a part in this story I’m going to describe to you. But the stars of this story are primarily Sasha Banks and Bayley. As I said before, these two had similar starts in NXT but along the way, they went their own separate paths. Sasha becoming the fierce egomaniacal NXT Women’s Champion. While Bayley remained this plucky underdog who the fans gravitated towards but Bayley could just never get the job done.

All four of these women collectively became known as The Four Horsewomen. A name adapted from ‘The Four Horsemen’ who were a wrestling stable from the 80s and 90s that included Ric Flair (Once again, Charlotte unable to escape the legend of her father). Despite this, Bayley found herself through her trials and tribulations, betrayed or stepped on by Charlotte, Becky Lynch and Sasha Banks. All three of them found great success while Bayley got nothing. This would culminate in July 2015 when the Four Horsewomen were promoted from NXT to the main shows…minus Bayley. The other three women, who revolutionised women’s wrestling on little NXT, were now getting rewarded by being stars on the main shows in front of larger audiences. But poor Bayley was left behind.

That was where Bayley’s road to redemption began. Around the time that Charlotte, Sasha and Becky switched to the main shows, Bayley was just recovering from a hand injury she had suffered in a match two months earlier against her opponent, Emma. Upon her return, Bayley embarked upon a videogame like path to the top. She started off by beating Emma in a rematch. She challenged Charlotte to a match before finally beating Becky Lynch to become the No.1 Contender to Sasha Banks’ NXT Women’s Championship.

This NXT Women’s Championship match had tremendous prestige attached to it. It would be the penultimate match of NXT’s next special event. A ‘pay per view’ from Brooklyn, New York’s Barclays Arena in front of 13,000 fans. This is monstrous compared to their normal attendance figures in Orlando which are roughly 500 fans. Plus the fact that this was to be the penultimate match of the event showed how popular women’s wrestling was in NXT. On the main shows’ special events, the women’s title match would NEVER be the penultimate match. It’s morely likely to be buried in the middle somewhere. It was a testament to Bayley and Sasha that the production staff behind NXT would put them as essentially the co-main event. 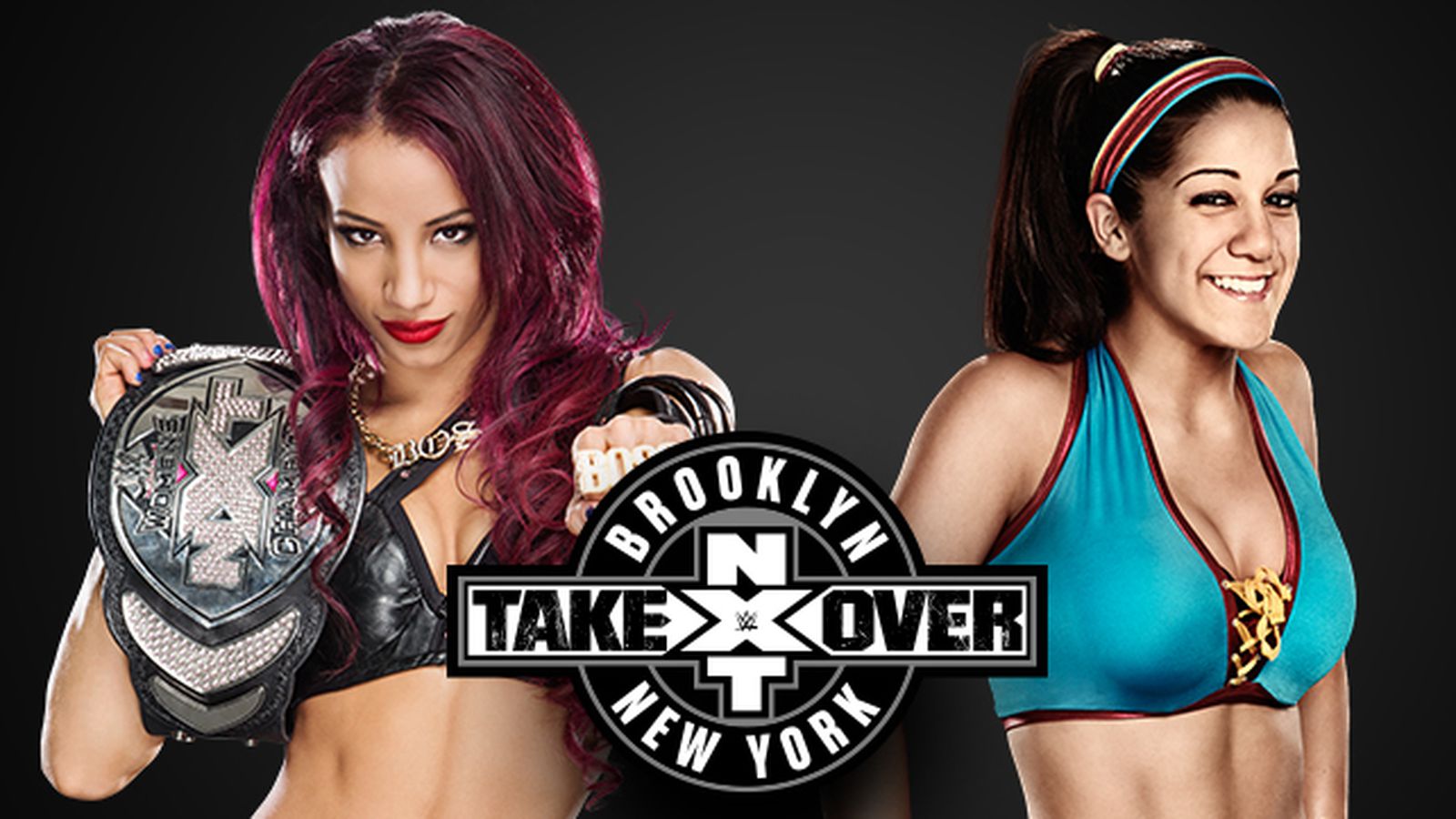 This fantastic video package encapsulates the fall and rise of Bayley so well: