The Comeback ahead of it’s…comeback.

Until a week ago, I had never watched The Comeback, the 2005 sitcom starring Lisa Kudrow. But ahead of it’s return to TV after nine years off the air, I decided to give it a go. Until that point I thought The Comeback, which was cancelled after one season, was just another post Friends project by one of it’s actors that failed to grasp audiences (See Dirt, Studio 60 On The Sunset Strip and Joey). However what I found was a pleasantly poignant watch.

The Comeback presents itself as unedited footage from a reality show called The Comeback which follows former star actress Valerie Cherish (Kudrow) as she successfully auditions for a new multi camera sitcom called Room and Bored. Room and Bored is one of those horrible multi cam sitcoms with a young cast of good looking people who make cheesy sex jokes and live in an apartment that’s decorated head to toe in a menagerie of crazy bright colours. Valerie plays the spoilsport old auntie of the show who flummoxes about in a jogging suit with the catchphrase “I don’t need to see that!”. Behind the scenes, Valerie finds herself at odds with her much younger castmates and especially, one of the head writers of the show Paulie G. The Comeback also follows her at home with her husband Marky Mark and stepdaughter Cassandra and shows Valerie as she navigates through Hollywood hoping to stay relevant and make sure the reality show she’s filming presents her as a fun loving actress who is on an upswing to stardom. 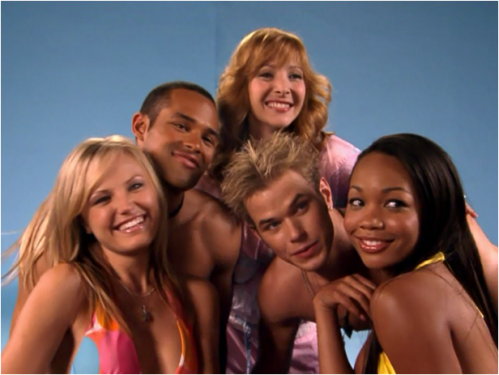 As somebody who hasn’t watched Friends in over ten years (and even then I barely watched it) I was pleasantly surprised by the presence of Lisa Kudrow. Obviously she is no stranger to sitcoms so I think she would have found no problem slipping into this role. Kudrow exhibit’s a range of emotions as Valerie struggles to make her presence known as her star is overshadowed by the young cast in particular that of Juna Milken (a then unknown Malin Akerman). There are shades of David Brent as Valerie plays up to the camera and sometimes you just find her cringe worthy antics a little tiring but audiences should find sympathy in the way Valerie often finds herself mistreated by her co-workers in particular head writer Paulie G. who is effortlessly a complete bastard to Valerie throughout the entire series. Valerie is given many setbacks in the show but she is given her triumphs too which stops the entire show being miserable as Hell to watch.

The Comeback began around the same time as Entourage. Both shows presented a satire of Hollywood and the film industry and it’s believed that this is one of the reasons The Comeback was cancelled, that there just wasn’t room for both of them on HBO. As somebody who went through all eight seasons of Entourage, I can safely say I wish The Comeback was given more seasons instead of Entourage. Whereas Entourage preferred to show the wild party side of Hollywood, The Comeback was more concerned with the minutiae of that world. I think The Comeback had an advantage in focusing on a female protagonist. In an industry where age and gender is a big factor in the success of a performer’s career, a mid forties actress is much more engaging to watch than a mid twenties guy who can just walk into a Martin Scorsese film (If you haven’t seen Entourage, let me assure you that happens!).

The Comeback happily spoofs reality television as well. Particularly the way in which real life is manipulated to create exciting television. But also the technicalities of filming reality television. Valerie’s multiple cameras following her often act as a hindrance to her as she navigates her life. In one scene, Valerie and her husband are driving to Palm Springs (2 hour drive) and are told that they’re not allowed to play music on the CD player because the rights to the music would cost too much, leading to an uncomfortable silent drive.

But it’s the way in which The Comeback lampoons reality TV’s clamouring for ratings that is it’s real genius. I can’t remember the state of reality television in 2005 (and I would rather not remember, frankly) but I imagine it’s nothing compared to the behemoth it is today. I think The Comeback was quite prophetic in the way it predicted just how bizarre reality television would become nine years later. Fake shows include ‘Take That‘, where married couples hit each other with shovels for money and ‘America’s Next Great Pornstar’ where one challenge involves contestants running up a flight of stars without spilling a dollop of crème-fraiche in their mouth. These shows aren’t a world away from real shows today such as Killer Karaoke and Naked Dating.

Upon The Comeback’s return in November, TV is going to look drastically different to 2005. It’ll be interesting to see how The Comeback parodies it and if they make any more prophetic predictions about what the future of television holds.

← Doctor Who and the Adventure of the Rose-tinted Glasses
Measure of a Man: The most exciting episode of Star Trek (and it doesn’t have any action) →