Recently I have had the pleasure of catching up with The Good Wife. This show never really struck me as something that I could enjoy because A) It was a network drama and therefore would feature twenty odd episodes a season (not something I’m a fan of) and B) That title doesn’t fill me with hope. It sounds like a bad melodrama that you might see on The Hallmark channel. But after seeing each season greeted with rave reviews, I decided to finally buckle down and start making my way through the episodes (Thanks Netflix!).

I’m about a quarter of the way through Season four at the moment and I was going to wait till I had completely caught up before writing this article, but I couldn’t wait. The Good Wife is just great great television.

The reason I have a problem with television seasons of twenty odd episodes length is that I tend to find the lack of serialisation often prevalent in these sort of dramas such as cop procedurals, legal procedurals, medical procedurals etc is something I’m not a fan of. I want characters who grow throughout the season, not ones who show up, solve a case and then move on to next week with no real last effects visible in the next episode.

Somewhere along the way, I’ve missed that there are network television shows that are successful at balancing the serialised and procedural elements of their shows to make gripping television. The Good Wife is one of those shows.

The Good Wife follows Alicia Florrick, the wife of a Chicago states attorney who is the victim of a political scandal when her husband is caught sleeping with a prostitute and embezzling money. She is embarassed in public and with her husband sent to prison, she must return to her old profession to support herself and her two kids.

After being shamed by husband very publicly, Alicia must now get her life on track. She is now commonly referred to by her clients as merely ‘That politician’s wife’. The early parts of The Good Wife follow her as she attempts to break out of that shadow she’s in and prove herself to be an excellent litigator. While at the same time in her personal life, she must look after her kids who too have been affected by their dad’s scandalous affair. I’m not an expert on acting but I think Julianna Margulies plays Alicia superbly both in Alicia’s private life and her affairs in the courtroom.

Ah, the court action where the procedural elements come from. My experience of legal dramas coming into The Good Wife was zilch except for that one episode of Kenan and Kel where Kel dropped the screw in the tuna. At first the legal jargon flew straight over my head but gradually you do pick it up, a bit like the street slang in The Wire. The court cases themselves are often quite exciting and are usually they are ripped straight from the headlines. Featuring many twists and turns within one case. Not all cases are related to killers and psychopaths, in this 21st century world, they are related to technological issues too. The Good Wife can take a bow for how tech-aware it is, with cases such as copyright infringement and online privacy coming under the microscope. Recently I watched an episode revolving around Bit Coin. Instantly I rolled my eyes and expected some half assed attempt to be hip by featuring an up to date internet phenomenon that would be poorly researched by the writers. I was surprised to be greeted with a smart, informed take on Bit Coin. Even the presence of Jason Biggs couldn’t bring it down!

Guest stars are a common occurrence in The Good Wife. Sometimes familiar faces show up as the judge in court. In the last episode I watched, Dominic Chianese (Uncle Junior from The Sopranos) was the judge and he knocked it out the park. A guest actor who certainly deserves praise is Michael J Fox who sometimes shows up as a rival lawyer to Alicia’s firm. Fox is Machiavellian and isn’t afraid to play dirty to get one over Alicia‘s firm. He’s a joy to watch. 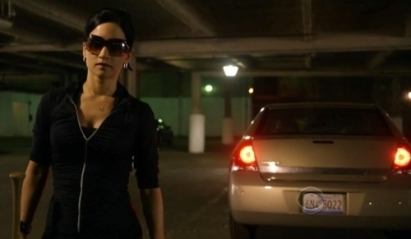 Of course those guest stars are propped up by a great cast. I won’t go into detail on all of them but they are all pretty great (look at me shamefully gushing here). I will highlight two particular actors who deserve praise though. First, Archie Panjabi, who plays the law firm’s special investigator, Kalinda Sharma. Kalinda is street smart, hip and intelligent. She’s sexy and she knows it and she’s got a mysterious past. Kalinda is a fan favourite in the Good Wife fanbase for her cunning ability to do her job so well while not taking s*** from anybody.

Also special mention must go to Alan Cumming as Eli Gold. The Good Wife is happy to explore outside the courtroom law offices with arcs centered around the politics of Chicago. That’s where Eli comes in. Originally intended to be a recurring guest star I believe, he was given main cast status from Season two onward. Eli is a political strategist who advises on policies and crises for politicians and commercial businesses. Like Alicia, Eli is good at his job but he’s also incredibly funny. He seems to have a sharp witty line for any situation and is great fun to watch.

The Good Wife manages to mix the procedural elements of a legal drama in with stories revolving around politics, family life, business politics and forbidden relationships confidently and assuredly. Although I haven’t seen it yet. I have heard that The Good Wife‘s latest season (five) is the strongest one so far and I for one cannot wait to get stuck into it.