There’s nothing wrong with a weak handshake… 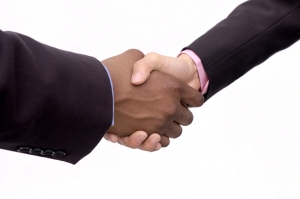 Be it an episode of Room 101 or QI, a discussion amongst friends or a knee jerk reaction at a formal dinner, one thing is clear: a lot of people have a big problem with weak handshakes. Social etiquette is a horrible thing to negotiate. It’s often trying and stressful, especially for those with low confidence. Some of us know this and we all generally commit various faux pas. So why is the weak handshake such a big no-no for many people? To break down the reasoning and arguments for the weak handshake hate I went to Google and found various articles and comment threads discussing the topic. Most of them by men and those that weren’t were by women who expected men to act a certain ‘manly’ way.

One reason given often is usually that a weak handshake shows disrespect. A stranger you have just met has decided to disrespect you by not applying the correct amount of hand gripping force in response to your welcoming gesture. Incorrect! Some people are shy, some are anxious, some just don’t like touching others and many have mental health and anxiety issues. They don’t mean any disrespect, in fact if they’re shaking your hand weakly it probably means they don’t want to do it, but they’re going ahead for your sake anyway. That sounds like a strong definition of respect to me, not the opposite. Now if you’re suddenly feeling the urge to say “I’m sympathetic to those with problems or who are shy but…” don’t say it, for the same reason that people shouldn’t say “I’m not racist but…” If you have to justify your next point in such a way it’s probably not true. If you’re truly sympathetic to shy people or those with problems you simply won’t judge them for a weak handshake: the end. They didn’t choose to be the person they are, nor did they choose to not have the ability to overcome their insecurities. You can argue that it’s only three seconds of their life, but to the anxious that means they only have three seconds to get it right.

Another argument that reared its head frequently was the idea that one can judge someone’s character from a handshake. The only character you can gleam from someone’s grip strength is their confidence and again that may not be the case as there could be other reasons (mental health and so on). I’ve never heard any psychologists, biologists, sociologists or anyone for that matter say that morality or integrity can be sensed through the palm and fingers. In fact if you judge someone for their handshake that says more about your character: that you’re likely to base your views of others in small subjective criteria based in what sounds like weird social prejudices against the shy. Because that is the only quality a weak handshake can potentially reveal at first glance. In fact due to the well spread nature of this pet peeve most anxious and shy people are well aware that they are likely to be viewed as disrespectful or lacking self-confidence every time they shake a hand, this only drains the confidence and thus strength of a grip further. Arguably handshakes would be stronger if no one talked about hating weak ones, because the shy and socially anxious would have less to fear.

The other arguments I discovered seem based in prejudices. I found frequent references to the femininity of weak handshakes, the implication being that feminine is bad, as well as various homophobic slurs. Now if you’re one of these people you’re probably too far gone for me to reason with. If you are not one of these people, recognise that you act in a way that is similar to the sort of people that use hate speech. And frankly I can see why: the expectation that others, regardless of who they are, should act according to your values upon meeting you is very dominating behaviour. People who don’t like handshakes aren’t actually expecting you to do anything for them when they meet you, they aren’t putting pressure on you and they’re likely to only judge you for you. When you expect someone to shake your hand whilst reserving the right to judge them for it, you are forcing your expectations on someone you don’t know over a fairly small gesture. Tell me, which of these sounds more aggressive and disrespectful of others really? Which shows a lack of character and integrity? If some takes your hand limply, they’re trying their best and if you judge them for it you aren’t trying yours. The anxious and fearful sometimes need the help of the confident to build them up, not tear them down.

Kissing relatives on the cheek and fist bumping is also terrifying.

Why is Malcolm Tucker a hero? →

2 thoughts on “There’s nothing wrong with a weak handshake…”