There’s not much to say about Limbo. It’s a 2D platformer where you slowly progress from left to right. You play a little boy on a journey through a black and white hellscape who is looking for something or some one. And SPOILERS you find some one.

The game is already well known for several things. It’s clean, but attractive visual aesthetic that carves detail from plain and flat blacks and greys. It’s also known for its moody score that mostly serves to give brief moments of elation before plunging you back into fear. Mostly however the score just serves as tension, or as hints to the platforming puzzles. The game is also known for its brutal (and frequent) killings of the young protagonist. Beyond that there is little to the game, it is all surface.

Limbo is abstract by the creators’ intent and that shallow surface is better than it needs to be. However, does the gameplay enhance this limited aim? In short: No.

The jumping is satisfying enough and seems to mostly make sense relative to the character’s speed. I found that the B button (tested on Xbox 360) when activating buttons was deeply inaccurate. Often when falling past a button you had to hit at the right moment, I found I got it dead centre and the game failed to trigger the button. Then this was often followed by me hitting the button inaccurately and succeeding. The puzzles are clever, but not too hard. On the other hand there are a few that aren’t clever, but are hard. I’ll admit I consulted guides at three points in the game. I found in each case the solution wasn’t my limited understanding of the puzzle, just that the solution was something I didn’t realise the game’s character had the ability to do. I did not feel that I cheated the game by looking up the solutions because I felt the game had cheated me. Yes, you only use one stick and two buttons, but in any given interaction (especially one with multiple objects) that is a lot of different button combinations to try at random, especially when you don’t even know you need to be discovering new features randomly. There is at least the off chance that you’ll accidentally discover an Easter Egg through this process though. 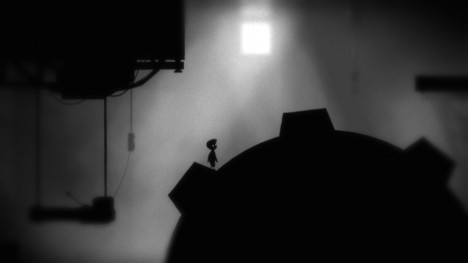 Overall the length of the game is about right (for an indie game of this price and amount of gameplay depth), however it is simultaneously too long. How? Because it peaks too soon. Early in the game you contend with a giant spider over several chapters, eventually you emerge victorious and face no further threats like it again at any point. The spider is tense to be around and you have to be more horrific than it to beat it. However, given the game’s approach of having you learn through mistakes eventually you become deadened to the scares and no amount of tense music, or repetitive extreme gore, will undo that. So whilst the game is the correct length for the format, it plays all its best hands up front and leaves nothing for the following hour/two hours after.

Given Limbo‘s reputation as a moody thriller with texture and depth, I was left a little disappointed. I do not usually struggle to enter a game open minded and I usually try to ignore reputation, however this game wants to be seen as clever. It wants you to see its art, music and mood as impressive and stylised. That surface is beautiful to behold and it does grip you, but not for very long and nothing ever replaces it as you get further in. Especially with the ending being a weaker than weak “story” pay off. I hate it when a character’s motivation is provided after they’ve completed their quest, it’s engaging to know that early on or upfront, otherwise there is no emotion to it, this is doubly important in an abstract, silent and animated world.

Ironically the name Limbo is a perfect description of how I feel about this game. I am floating somewhere between liking and disliking this game and miles from loving or hating it.

P.S. Yes, I do know the girl is his sister, I just didn’t feel the game itself set that up well or made it clear. Artsy bullshit to cover up use of the damsel trope or to make it seem less cliched.

One thought on “The Dreaded Backlog: Limbo”